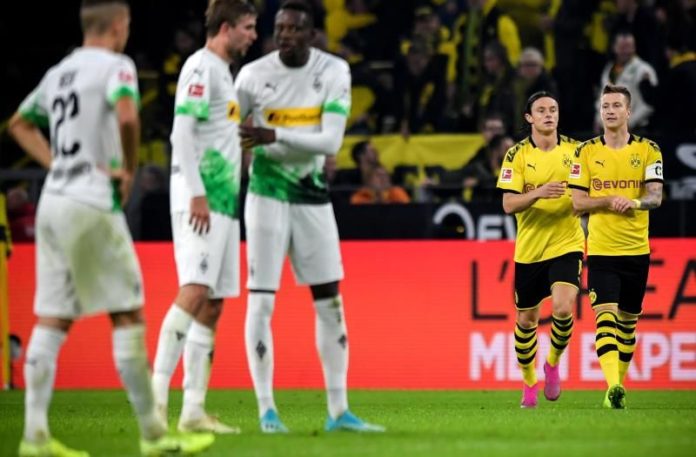 Borussia Dortmund won today 1-0 against leader Borussia Mönchengladbach, with a lonely goal from his captain Marco Reus, which remains in the fight for the Bundesliga title.

The Dortmund needed not to lose contact with the point group and the Gladbach had the opportunity to increase the advantage over his most immediate pursuer. Now Gladbach is still leading but tied for points with Wolfsburg and Bayern, Dortmund and Leipzig just one point below.

The game was key for both teams and that was noticed from the beginning with the attitude that players took to the field. The commitment was intense, with a certain degree of aggressiveness on both sides and with occasions for both sides.

The first arrivals were Dortmund for a shot by Thogar Hazard in the 6th, a header by Thomas Delaney in the 7th and a shot by Julian Brandt in the 12th that forced a stretched goal Yann Sommer.

Then the Gladbach appeared, with a header from Embolo above the goal in the 18th and then, after a free-kick from the left, with a shot at close range of Lainer to which Bürki reacted with a great stop.

The two goalkeepers had an important role in the first part. Bürki, in addition to the stop against Lainer, won two times hand to hand to Embolo when the Gladbach striker had a clear track towards the goal.

Sommer, meanwhile, showed off with a good stop before a header from Mats Hummels in the 32nd minute.

In 33 a Hazard shot went to the bottom of the goal but the goal was annulled by the VAR for offside three plays before.

The second half continued in the same tonic until, in 58, Marco Reus opened the scoring with a shot from a short distance, between Sommer’s legs, a pass from Hazard.

In 70 Dortmund lost by injury to Bürki, who with his actions against Embolo had prevented his team from being disadvantaged, and substitute goalkeeper Manfred Hitz had to enter the field.

After the departure of Bürki the Dortmund seemed to have gone down and came a good phase of Gladbach that was close to achieving the tie.

In 72, Hummels managed to cross his foot when Patrick Hermann was going to finish off with an empty door. In 76 Steffen Kramer finished off slightly inside the area. The ball was in the middle of Dortmund who had difficulty playing out.

After 80 minutes the Dortmund seemed to find the formula to go out playing and had good arrivals, including a goal annulled to Brandt in 84 out of place of Reus, but, despite this, he could not have tranquility until the final whistle .

In 89 Hitz saved the victory against a shot of Neuhaus within the small area. Then six tense minutes of discount followed but Gladbach did not reach him.