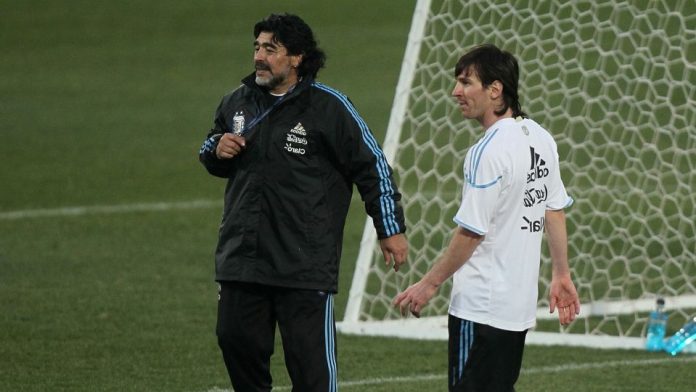 Diego Armando Maradona was Lionel Messi coach in the Argentine national team between 2008 and 2010 and part of that process left a video that had not been revealed where the two figures are seen playing the ball like cracks.

After his four World Cups as a footballer, the great idol had the opportunity to lead the Argentine National Team and the most brilliant figure of his team was Lionel Messi. Those moments shared between the two national soccer stars were forever recorded in history.

In the account “El Pibe de Oro”, which has more than 25 thousand followers on Twitter and constantly reviews images and videos of “Diez”, unpublished material by Diego and Leo was published.

After the triumphs against Nigeria (1-0) and South Korea (3-1) in the first two presentations, the Argentine team faced Greece in Polokwane on June 22, 2010. That night, in the previous one, Maradona accompanied Messi during the warm-up, they made a series of passes together that was recorded by a fan from the stands. From 10 to 10, the DT made the player run with his left foot.

Against Greece, in the 2-0 victory with goals from Martín Demichelis and Martín Palermo, it was the first meeting in which Leo took the captain’s belt for Argentina. Because Javier Mascherano was a substitute, Diego decided that the man from Rosario should wear the bracelet. A unique match that still leaves eternal moments to remember.