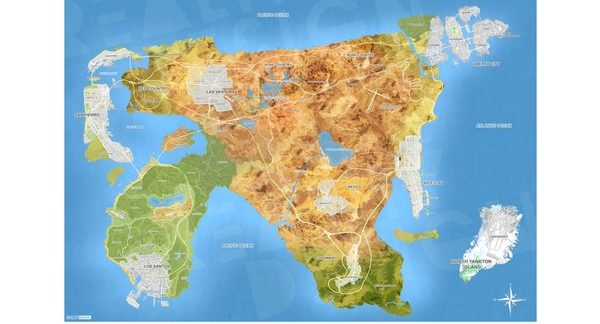 There has been a remarkable development regarding GTA 6, which we have been talking about for a long time. It was stated that a secret document of Sam Houser, one of the founding partners of Rockstar Games, was seized. According to allegations, this document shows the map of GTA 6 determined in 2013.

There was an interesting development regarding GTA 6, which is thought to be approaching. Allegations from a source that has made similar leaks in the previous periods reveal that the locations where GTA 6 will pass are certain years ago. The more striking aspect of these claims is that the map of GTA 6 has been available since 2013.

The actual sources of information leaked by the two sources named Yan2295 and Razed nickname are also remarkable. In fact, Yan2295 and Razed say that they obtained the data they shared through Rockstar Games’ co-founder Sam Houser. Razed claims that he obtained this information, which is stated to contain the GTA 6 map, through a secret document belonging to Houser.

Razed also owns a YouTube channel called “GTA Expert”. Razed, who also prepared a video about the data he obtained from a secret document belonging to Houser, conveys the details of the information he has in this video. One of the interesting explanations made by Razed in the video is that GTA 6 studies have been carried out since 2013. Razed states that a team of 60 people worked on GTA 6 in 2013, but there was nothing definite at that time.

GTA Vice City was launched in 2002 and had a great interest at that time. GTA Vice City, which managed to become one of the best-selling games of its time, was set in Miami. In 2013, the Rockstar Games team thought it might be a return to Vice City. As a matter of fact, this situation has been spoken in the scope of many claims that have emerged until today.

Snowfall and snowy locations are one of the situations Rockstar Games occasionally comes across. In fact, there is already a profitable position at the beginning of GTA 5. Also in the previous games of the series, there were several times snowy videos. So Rockstar Games would have spent GTA 6 in a profitable position. In fact, this issue has been raised in recent times and it is claimed that GTA 6 will be extremely realistic in terms of climate.

Mexico was not a region named recently. However, just south of Mexico, Colombia and this South American country are one of the places that have been frequently mentioned so far. Rockstar Games even sent gifts to some publishers due to the arrival of 2020, including the Colombian flag among these gifts. Considering that ideas can change from 2013 to today, this option is also reasonable.

We all know that the GTA series usually takes place in real-world regions. So it seems that Rockstar Games’ completely imaginary city development situation is not very likely. However, since our source in the claim is one of the founding partners of Rockstar Games, there is of course the possibility of such a situation. However, it is not currently possible to know what is true about GTA 6.