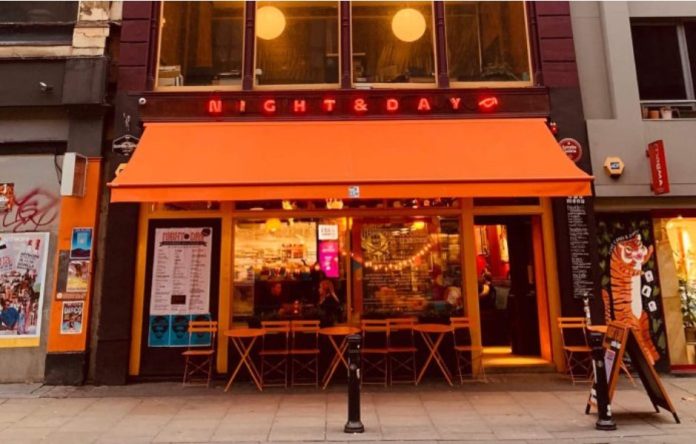 The venue is set to face a court case from November 29 – December 1.

Manchester Night & Day announced a fundraising concert in an attempt to keep the doors of the institution open.

Last month it became known that Night & Day faced a lawsuit over a noise complaint that could lead to its closure.

In an effort to draw attention to this case, the venue is currently collaborating with promoter and label Sour Grapes Records to hold an event called “Decibel Decades” on November 26. The concert is also timed to coincide with the 31st anniversary of the venue this month.

In addition to performances by local artists such as Lounge Society, Soup!, Deaf Deaf Deaf and others, the event will also feature a live Q&A panel with officials including Greater Manchester Music Commission Chairman Jay Taylor.

Tracks taken from each performance will be recorded on a cassette, which can be purchased at the concert venue on the same day. The leftovers will subsequently be sold exclusively on Mars Tapes.

All proceeds from the event and the concert cassette will be donated to the Music Venue Trust, a charitable organization dedicated to protecting and ensuring the safety of mass music venues in the UK.

“Decibel Decades” will take place just a few days before the start of the trial Night & Day on November 29.

After the news of its possible closure last month, the owner of the institution Jennifer Smithson called the case “unfair.”

“We were one of the founders in the development of the Northern Quarter, people wanted to move here because of the vibrant, interesting places like Night & Day, which are great and have really improved the area,” Smithson told The Guardian.

“What is particularly outrageous is that the planning department knew about the possible noise from the “Night and Day” when it agreed to rebuild the warehouse next door into residential apartments. It took a separate acoustic report to determine what could be done to prevent the noise from Night & Day from affecting the residents of the building. However, the developer did not prepare a separate acoustic report, and the planning department allowed the building to be occupied without appropriate sound insulation work.

“Now we must either accept the noise reduction notice, which will expose us to the risk of immediate prosecution in case of noise complaints, or go to court with significant costs to appeal it. This could mean the end of Night & Day forever. It’s a nightmare.”

“It’s so unfair. We believe the blame lies entirely with Manchester City Council. They could cancel the noise reduction notice and fix the problem they initially caused, instead of shutting down the business that has been the heart of the Manchester music scene for decades.”

In response , a representative of Manchester City Council said: “It needs to be made clear from the very beginning that the council has never threatened to close this place, and there is no legislation in place that would allow the use of a noise reduction notice to close. room.

“It is important to reiterate that extensive discussions were held throughout this process to try to eliminate the legally prescribed unpleasant noise, which was the only reason why the Noise Reduction Notice (NAN) was served.

“The council supports and supports the Manchester music scene, which was championed by Day and Night, but we have to fulfill our responsibilities in relation to breaking the law. It is also important to note that the source of complaints about this place is associated with very loud music playing early in the morning, and not with live performances of bands.

“Planning Board records show that an acoustic report was provided during the development of the surrounding blocks, and the Board completely rejects any suggestion that planning conditions were not met.

“The Council will continue to work towards a peaceful solution in which the noise problem is completely eliminated.”

Fans are invited to sign a petition here to help save the venue and use the hashtag #savenightandday.