Home Sport Manchester is ‘Devil’, the Uruguayan ‘magic heel’, Juve and Bayern in the... 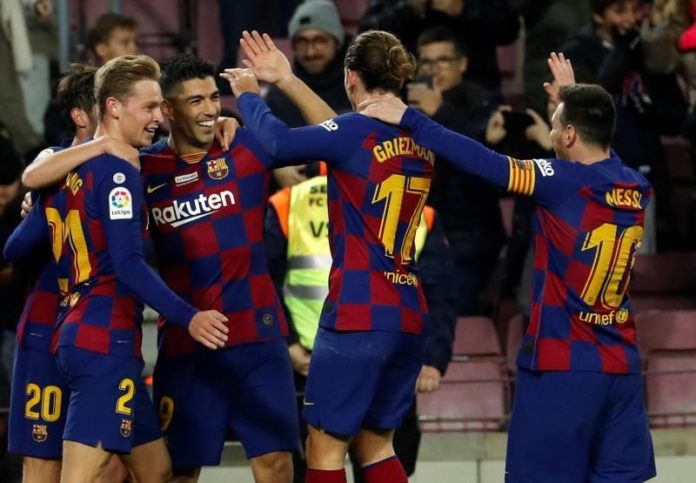 The defeats of the City against United in the duel of Manchester, Juventus Turin in his visit to Lazio and Bayern Munich in Moenchengladbach, stand out in a day of European leagues highlighted by spectacular goals such as the heel of the Uruguayan Luis Suarez spectacular goals and the South Korean gal in Son Heung-Min.

THE UNITED REMOVES THE COLORS TO A CITY AT 14 POINTS OF LIVERPOOL, “MARA-RONY-SON”

Manchester on Saturday lived its duel of maximum rivalry, a City-United that in recent years had left the ‘citizens’ happy but this time put the ‘red devils’ in ecstasy. And the whole of the Norwegian Ole Gunnar Soskjaer, who is not doing precisely for a good season, took the colors from Pep Guardiola, and in the same “Etihad Stadium” (1-2).

A defeat that could be more forceful, because United went to 0-2, with Rashford and Martial, and only saw his advantage cut five minutes from the end (the Argentine defender Otamendi, who jumped on the pitch at the time) . A whole catastrophe for the City, which already sees fourteen points of the leader, the unstoppable Liverpool, with only sixteen days played, in what lends itself to say as his goodbye to revalidate the title. A long time ago, a Guardiola team started a league so badly and the worst thing for their interests is that the lost, tired team is seen. Everything suggests that now it will turn body and soul in the ‘Champions’.

And even worse for the City was the image given by some of their fans, who made racist gestures to United players. The club, of course, reacted quickly and issued a statement of conviction.

Liverpool, on the other hand, flies. Bournemouth (0-3) was imposed at home, with goals from Oxlade Chamberlain, Keita and Salah. Nor does Leicester give up, who strengthened his second position by scoring in his visit to Aston Villa (1-4, doublets of Vardy and Iheanacho), staying 8 points behind the leader, but extending his lead over City to six.

The win of the day was in charge of the Tottenham de Mourinho, who put the ‘handyman to the Burnley (5-0), with a double by Harry Kane, one of the goals of the Brazilian Lucas Moura, and a real jewel of the South Korean Son Heung -Min that lifted own and strangers from their seats. A goal mixes Maradona, mixes Ronaldo Nazario, with 80 meters traveled. To frame.

LA VECCHIA SIGNORA DESPAIRS, THE ROMANS ATTACK THE POWER OF THE NORTH

Juventus Turin by Maurizio Sarri does not fall in love. If with Massimiliano Allegri he was almost champion at this early season, he is now second, two points behind a leading Inter Milan, and what the interists ‘punctured’.

In his visit to Lazio, the ‘Vecchia Signora’ suffered his first league defeat (3-1), which adds to the draw at home of the previous day with the modest Sassuolo (2-2), and especially to the nine lost points in the fifteen days that take. And that in the Roman Olympic they went ahead with so much of Cristiano Ronaldo (m.25), but on the verge of rest tied Luiz Felipe. The second half was lacial, crushing the triumph of Ecuadorian Felipe Caicedo with the final goal.

Inter spent twenty-four hours from sadness to joy. He planned to lose the lead on Sunday after yielding a home draw with Roma on Saturday (0-0), but in the end he was the great beneficiary of the day. Keep on top and with one more point of advantage.

On the other hand, the Naples of Carlo Ancelotti, once a rival to the ‘scudetto’, is in critical moment. He did not pass the equalized in his visit to Udinese (1-1), which is the fifth in the last seven days in which, in addition, he fell twice; that is, five possible fourteen points. He has fallen to seventh place, 17 points from Inter.

THE DREAM HEEL OF LUIS SUÁREZ, BARÇA AND REAL REMAIN UNCEDERED, THE ‘CHOLO’ REMAINS WITHOUT SQUARE THE CIRCLE

LaLiga remains the same as in recent weeks: Barcelona and Real Madrid continue to be matched at the top, after winning Mallorca (5-2) and Espanyol (2-0), respectively, the Azulgrana Leo Messi and the French Karim Benzema continue with his fight at the head of the classification of scorers, now with the advantage of the Argentine after his triplet; and Atleti the ‘Cholo’ Simeone again sows doubts.