Home News Manchester City champions in the Premier League! The most memorable turn in... 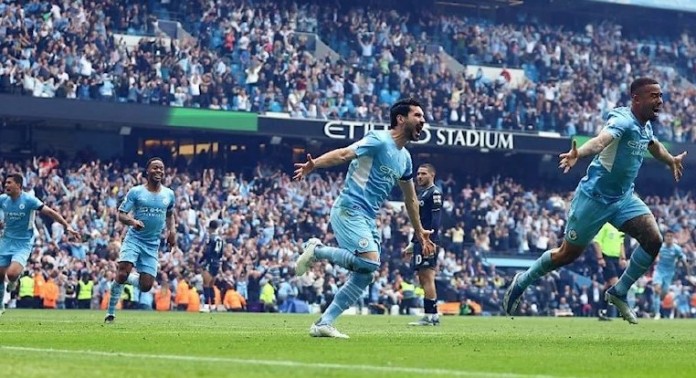 In the last week, which had incredible moments in the Premier League, Manchester City managed to win the championship in 5 minutes. City, which entered a completely different race with Liverpool, made the comeback that Ilkay Gundogan ignited and won its 4th championship in the last 5 seasons.

The most epic 5 minutes in the history of the Premier League took place… Liverpool and Manchester City, who went head-to-head for the championship, gave the whole world an incredible excitement.

Manchester City, which was 1 point ahead in the last week, made an incredible comeback in the match where it died and resurrected and reached the championship.

Hosting Aston Villa in front of the crowded stands, Manchester City fell back 2-0 with goals from Matty Cash in 37 and Coutinho in 69.

Manchester City, which was shocked by Aston Villa, coached by Liverpool legend Gerrard, experienced an unforgettable ebb and flow for many years.

Despite falling back 1-0 against Liverpool Wolverhampton in the other match, which started at the same time, they managed to pass the first half 1-1.

Liverpool needed a goal to win the title to grab the title from Manchester City, who were down 2-0.

Unbelievable things happened in the last 20 minutes that the whole world was waiting for. City’s Pep Guardiola substituted Ilkay Gundogan in the 69.

Ilkay Gundogan, who opened the door of hope in 76, lit the fire of coming back on behalf of his team. In 78, Rodri made the situation 2-2 and there was a joy that would destroy the stadium.

Ilkay Gundogan, who once again appeared on the stage in 81, made a 3-2 comeback and brought the championship to Manchester City.

Pep Guardiola and his team won their 4th championship in the last 5 seasons.

Despite Liverpool beating Wolverhampton 3-1, City lost the title when they weren’t stuck.

5 Free BTS Fangoods for the Bang Bang Con: The Live...