Home News The man who saved the car of someone he did not know... 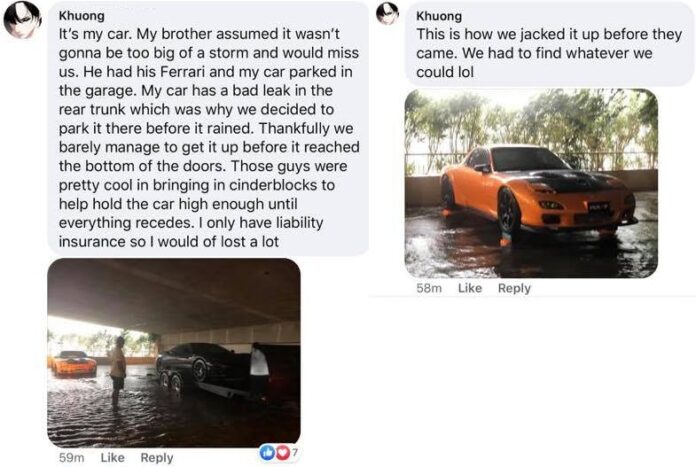 After the hurricane of Cristobal influenced Mississippi, a man set out to save a Mazda RX-7 from a flood that he had not known before, after a post he saw on Facebook. This movement of the young man was highly appreciated on social media.

Hurricane Cristobal, which runs along the Gulf of Mexico, has been threatening the USA for the last few days. The hurricane, which finally hit the state of Mississippi, caused floods in the region. A man named Austin Owens, who saved the car of someone he never knew during the floods that influenced Mississippi, became the hero of social media.

Owens at Mississippi Gulfport at the time of the incident saw an orange Mazda RX-7 photo in a Facebook group he was a member of. Having learned that the car was at the Golden Nugget Casino in Biloxi, which is located very close to him, the man immediately took action by calling a friend instead of commenting on the photo.

Owens and his friend placed briquettes under the wheels to prevent the vehicle from drifting in the flood:

To save the car of someone they have never seen before, two friends, who jumped into a Ford Bronco car and set off, bought several briquettes by stopping at a store selling household goods before going to Biloxi. Upon arrival at the scene, Mazda’s owner and a few others were trying to save a Ferrari 360 parked right next to the Mazda RX-7.

While the owner of Mazda and two others tried to save Ferrari, Owens and his friend worked on Mazda, which was previously raised from the ground with bricks. The duo who managed to save Mazda later helped others load Ferrari into the trailer.

Owens thinks someone else will do the same for him:

Set out without thinking to help someone he never knew, Owens explains why he did something like this: “It’s a beautiful, rare car, and there aren’t many of them anymore. This is one of my dream cars. If I stay in the same situation with a car like this, I hope someone will do the same for me. It wasn’t up to me to leave it there. ”

Before Owens and his friend arrived, the owner had put Mazda on the briquettes, but it probably wouldn’t have been enough to save the car. This exemplary behavior of the young man was also highly appreciated on social media.

Vitalik Buterin Announces: Is This Mystery of Ethereum Trading Solved?