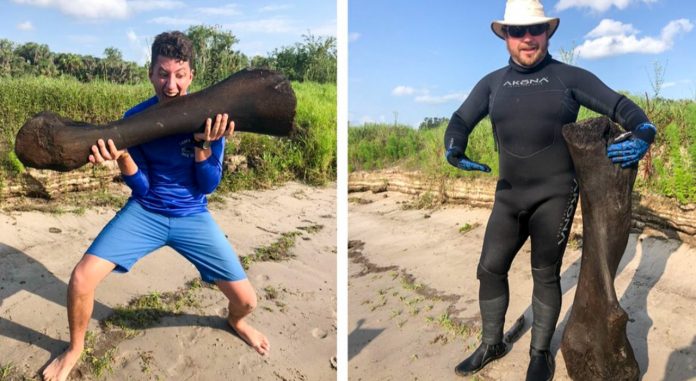 Mammoth bone found. Divers diving in a river in Florida, the United States, found a mammoth bone. Amateur paleontologists who excavated the fossil suggested that it was at least 100,000 years old.

During scuba diving in Florida on April 25, two divers uncovered a giant mammoth thighbone. The leg mammoth bone was preserved in the sediment at the bottom of the Peace River, about 89 km from Sarasota. During the Pleistocene, Colombian mammoths, which roamed the area between 2.6 million and 10 thousand years ago, were about 4 meters long and weighed over 10 tons. Divers, both amateur paleontologists, suggest that the thighbone belonged to a mammoth who died about 100,000 years ago.

The Colombian mammoth bone is 1.22 meters long and weighs about 23 kilograms. Colombian mammoths were a distant relative of the Asian elephant who lived in Florida during the Pleistocene. It is also among the largest mammoth species. These animals spread throughout the Western Hemisphere from North America to Central America. With the Pleistocene megafauna (giant animals), most mammoths went extinct about 14,000 years ago. Although they have overlapped with the first humans in North America for several millennia, it’s unclear whether climate change, overfishing, or other factors led to extinction.

The Peace River contains many fossils. The two also found a saber-toothed tiger tooth. Derek Demeter, director of the planetarium at Seminole State College, said he couldn’t believe it when he saw the fossil. Demeter also gave information about the fossil in an interview he gave to Fox 35. Demeter stated that the mammoth bone survived to this day as it was buried under sand in the riverbed. Experts have not yet done radiocarbon dating of the thigh. However, due to its density, Demeter claims that it is around 100,000 years old.

Demeter told the Orlando Sentinel that he found other fossils contemporary to the bone. He revealed clam shells, shark teeth, and stingray spines with Henry Sadler. Sadler, who taught, explained that they had previously found other mammoth bones in the river, including vertebrae and a chin piece. He donated these specimens to the Florida Museum of Natural History, but will use the mammoth leg bone for educational purposes at school.

Vaccines from covid-19 are sent by drones in Africa