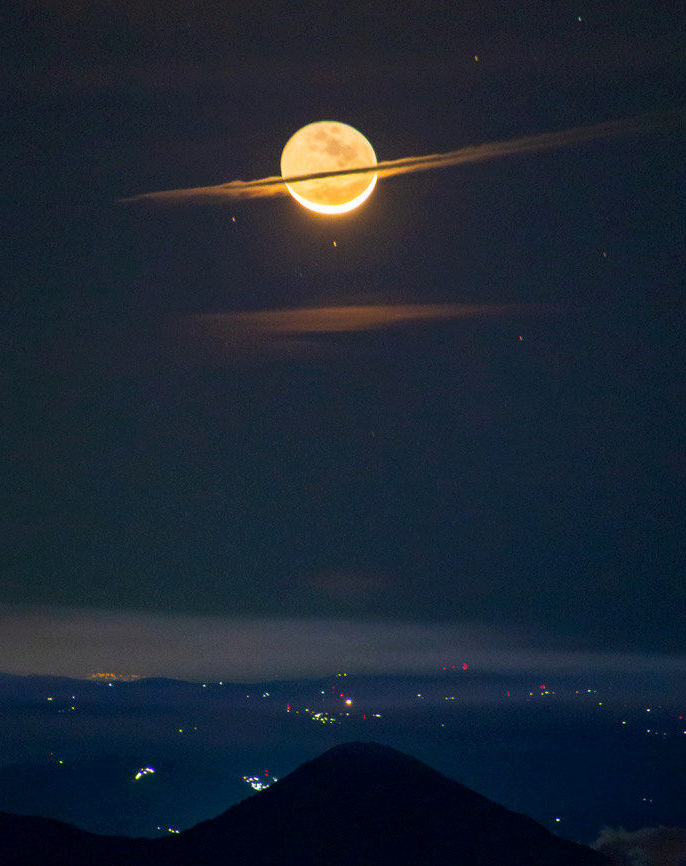 An incredible image of the Moon, the only natural satellite of our world, was recorded. The Moon, surrounded by clouds, caused it to resemble the planet of the gas giant Saturn. As we know, Saturn has rings.

The magnificent view of the Moon was taken after a 10-kilometer hike from photographer Francisco Sojuel to the Acetenango volcano camp in Guatemala. This striking image reveals a new perspective of the Moon and was shot just before the sunrise at the light crescent stage. In the photo, it is seen that the clouds around the Moon are illuminated by the Sun.

The moon looked like Saturn:
The photo, taken on the night with a clean sky, shows the stars shining above the towns of Guatemala and the mountains. Sojuel, who took the picture, described the moment when the Moon was similar to Saturn, and said, “This is one of the best moments I’ve managed to capture with the camera. You can express different emotions while looking at the photo. ” said.

NASA shared the stunning image on the website Astronomy Picture of the Day, which contains images from around the world showing our universe. The agency asked the photo, “Why does Saturn look so big?” a humorous note in the form. The note stated that the clouds passed the Moon.

Photographer Sojuel expressed that the image he obtained was arousing imagination and used the expression “Because it looked like another planet”. Saturn, which is the 6th planet of the Solar System in order of proximity to the Sun, has an impressive ring system. The rings of Saturn were first noticed by Galileo Galilei in 1610, but were identified by Christiaan Huygens in 1655.

See Also  Mars, Jupiter and Saturn will parade with the Moon this week

The rings of Saturn start from very little above the cloud layers of the planet’s atmosphere and spread up to 480,000 km from the center of the planet. The rings are made up of ice and rock particles. Their thickness does not exceed several hundred meters in most of them. According to researches, Saturn’s rings consist of 90-95 percent ice. However, the theories proposed so far regarding the formation of rings cannot explain the high ice content in the composition of the rings.

Apple Confirms iPhone 12 Will Be Late

Wear OS will remind you to wash your hands!

Launch of Call of Duty Modern Warfare 2 Remastered leaks on...

macOS Catalina 10.15.4 is out! Head-controlled cursor!

Is The Claim That Coffee Is Effective In The Treatment Of...