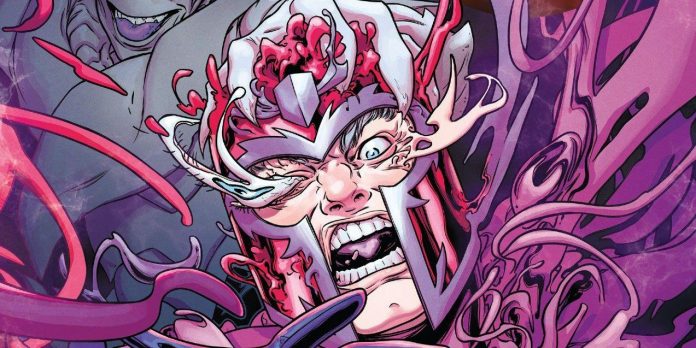 Attention: there are spoilers ahead for X-Men Red #3!

The long-time leader of the X-Men, the powerful Master of Magnetism Magneto, has taken on a new leadership role on the mutant planet Arakko, which sends him on a terrible and cruel journey in the pages of the famous X-Men Red. Magneto often struggles with his own power and how to protect his people without abusing his power and position, and his new place on the Throne of Loss as part of the Great Ring of Arakko will be the test of this struggle.

Magneto began his career as the leader of the mutant terrorist cell Brotherhood of Evil Mutants before joining the X-Men and leading the New Mutants at Xavier’s School in the 1990s before becoming a permanent member of the X-Men as a leader. a figure in the utopia era of the 2010s. Recently Magneto was one of three mutants, along with Charles Xavier and now human and evil Moira X, who created the Krakoa mutant nation before stepping down from his role in the Quiet Council at the end Tests of Magneto and Inferno.

X-Men Red #3 — written by the legendary Al Ewing with an illustration by Stefano Caselli and a breathtaking color by Federico Blee — tells the story of a new Storm team consisting of mutants focused on Arakki, who confront the “evil X-Men” Abigail Brand and try to keep Arakko stable. Brand devised a plan to use an incredibly unstable but powerful Vulcan to defeat Tarn the Indifferent in a Dangerous Circle that would oust Tarn from Arakko’s governing body in the Great Circle and give his “Throne of Loss” to Gabriel Summers and, eventually, Abigail. myself. Earlier in the issue, Sunspot, Magneto’s former student, tried to convince him to fight Tarn, instead believing that he could defeat him, but Magneto is so depressed by the losses he has suffered in recent months, as well as the ongoing trauma of his first child death (a human girl Anya, who cannot be resurrected from the resurrection protocols). which he refuses to fight. After Tarn, the previously undefeated leader of Locus Vile, horribly beats Vulcan to death without breaking a sweat, Magneto appears to confront Tarn, who apparently accepts his role as a warrior and leader.

After Sunspot tricks Isca Invincible into betting against Tarn, and because he is an incredible fighter, Magneto quickly defeats Tarn by putting his helmet on Tarn’s head, blocking his telepathy and crushing his head, eventually becoming the new leader of the Throne of Losses. The Great Ring of Arakko is divided into four separate sections: Dawn, Day, Sunset and Night, and Magneto’s new role as the Throne of Loss places him in the Dawn section along with Iska Invincible and Idyll Drying Up the Future. Dawn is postponed until the moment when the war begins on Arakko, which the Red X-Men seem to be leading, and the Throne of Loss is consulted when and if the battle is lost. Magneto forces the second Krakoan mutant to sit on the Great Ring after Storm, who assumes the role of the Throne of All-Around Us as the regent of Arakko and, frankly, is an ideal leadership position for him. Magneto’s long history of meanness, wartime, and leadership makes him an ideal candidate for the Throne of Loss, and seeing how the people of Arakko genuinely despise Tarn because of his terribly offensive battle tactics, Magneto is made to become a respected leader. on the planet, which he may not be ready for.

Magneto left Krakoa because he felt he did not deserve a place on the Quiet Council, and because he no longer “had the guts” to continue working on the Council after a series of terrible betrayals and losses as leader of Inferno. However, now his future as a leader is unknown, and joining the Throne of Loss may allow Magneto to reach new heights or growth and self-acceptance that he could never find as the leader of the X-Men.