Home Entertainment Magic: The Gathering can use an RPG in the style of For... 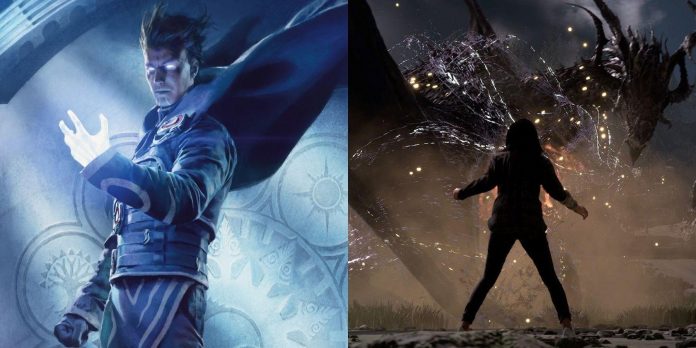 Forspoken hasn’t been released yet, but its gameplay is already causing interesting conversations. It’s no secret that magic is crucial to almost everything a player does in Forspoken; Frey’s magical abilities can be combined into destructive spell combinations, and she has exploratory abilities ranging from summoned surfboards to magical grappling hooks. Not every role-playing game uses magic to this extent, so it looks refreshing, but especially interesting because of what other games it can inspire. The magic-oriented RPG gameplay can be easily transferred to new games based on all well-known franchises, including Magic: The Gathering.

In the last few years, Magic: The Gathering has had a difficult relationship with video games. Magic: The Gathering Arena remains a very successful digital version of the collectible card game, but the Magic Legends MMO has been canceled despite several recent beta testing periods and an attractive concept. If Wizards of the Coast wants to try their hand at another Magic video game, Forspoken can be a good template. Instead of a multiplayer game like Magic Legends, Wizards of the Coast can order a single-player role-playing game with explosive battles, where players set up a planeswalker and travel through the Magic multiverse in search of adventure.

How Magic: The Gathering Can Adapt Forspoken Ideas

By now, Square Enix and Luminous Productions have shared enough information about Forspoken to give players a clear idea of the fights. The main character Frey Holland knows a lot of spells, between which she can quickly switch and apply them with one movement of her hand. Spells perform many different functions, and players are encouraged to alternate between different spells to determine their favorite combinations and styles of play. Frey learns new spells with the help of mana, which she can either find scattered around Atia, or get by leveling up; In other words, the more mana Frey earns, the stronger she becomes.

This structure can be easily adapted to the game Magic: The Gathering. MtG is about creating clever spell combinations and wielding a special type of magic, so a single—player role-playing game can use a very similar magic system to great effect. The developer could even imagine the player’s famous spells using Magic cards, as in the Magic Legends deck building system. When a player puts a spell on reload, he can “draw a card” by receiving an offer of a subsequent ability that goes well with the first spell. A mana system similar to the Forspoken system would also be very appropriate, since mana is very important in Magic: The Gathering. Players may need to accumulate mana of different colors in order to learn certain spells.

Aside from combat and spell development, other elements of Forspoken seem well suited to Magic. For example, Forspoken makes traversal and exploration extremely important; the role-playing game Magic: The Gathering could do the same by giving each Magic color unique passing skills. Green magic can offer mounts that the player can ride, blue magic can add flight and teleportation spells, and so on. Depending on which colors the player specializes in, he may perceive the world of Magic differently, which encourages multiple playthroughs.

Obviously, a single-player Magic RPG shouldn’t be a clone of Forspoken. Fortunately, the collectible card game has many ways to stand out. The plans for Magic: The Gathering offered a variety of explorable locations, each of which differed from Atia in its own way, while stricter rules regarding the colors of magic and their interactions could eventually make witchcraft feel very different. Nevertheless, the Forspoken concept offers a lot of ideas that the studio could one day use to create a new Magic: The Gathering game. At the moment, it looks like a similar Magic game is just around the corner, but at least Forspoken offers Magic fans the opportunity to wield explosive magic on a par with the powers of planeswalker.

Kep1er’s Debut Teaser Reaps The Pros And Cons Of This