Home Entertainment Madonna disgusted fans after licking water from a dog bowl in a... 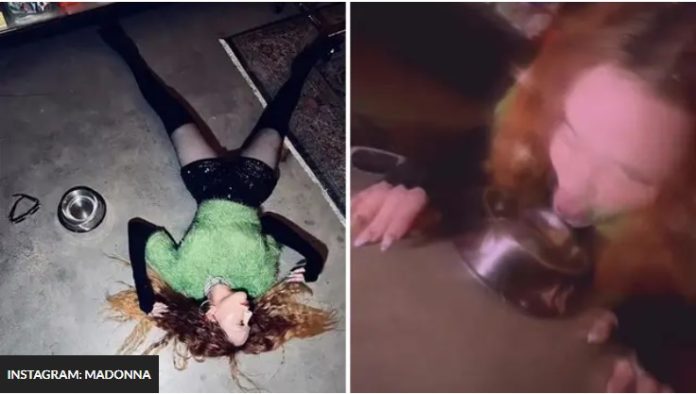 Madonna has disgusted fans after she licked water from a dog bowl in a bizarre video posted on Instagram.

The Vogue singer logged into a social media app to share a video of herself posing sexually with various objects before causing outrage with her “disgusting” act.

In an Instagram video posted on November 9, Madonna posed for photos in her neon green sweater, short shorts, tights and high boots.

While the photos seemed normal, things took a strange turn when she started posing pointedly with a bottle of sriracha and mustard.

But fans were most concerned when a break in the middle of her slideshow turned to a clip in which she bent down to drink in a silver dog bowl in the garage.

The singer stuck out her tongue as she approached the bowl, while the song “I Wanna Be Your Dog” by The Stooges was playing in the video.

In the comments, fans and viewers were concerned and outraged by what they saw.

“You’re back in business! What’s it? So sad to see you destroying Madonna’s iconic style!” one fan commented. “I’m sorry that I’ve been a fan of yours since I was a kid… and I just can’t accept this garbage style.”

“Come on, it’s disgusting. Think about it, you have kids. You were much better when you were younger,” wrote another.

“It’s getting more and more awkward. It’s not easy to be your fan anymore,” a third shared.

“She’s gone crazy. Shame, I adored her when she made funny music,” someone else added.

The Instagram video appeared just a week after Madonna went viral with a strange TikTok post. In the clip, the pop icon filmed herself lip-syncing with violent lyrics, which made fans worry about her well-being.