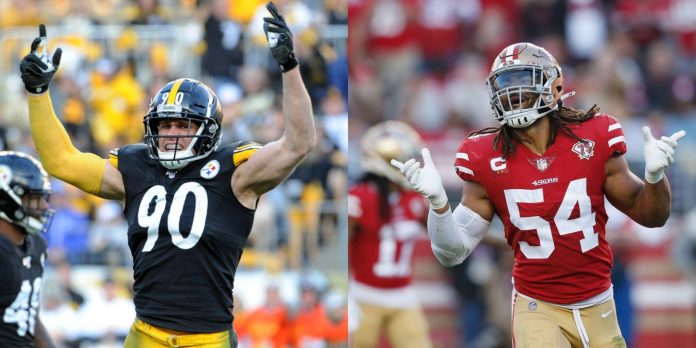 Fans who love to watch the defense will have no position filled with more excitement than the linebacker. These players are capable of leading the league in tackles, forced fumbles, interceptions, and sacks. When playing Madden NFL 23, they are certainly the most exciting.

But not every linebacker is made equally. Some are weak at coverage or rushing the passer. That can be a huge problem for gamers to exploit in Madden NFL 23. With these stars, players don’t have to worry, they’ll be doing what they do best, destroying offensive gameplans from start to finish.

It can take years and lots of accolades for players to break the top ten list, but Rashan Gary did so this year despite his inexperience and lack of honors. That’s not a slight to Gary’s inexperience; if anyone should feel slighted, it’s the Packers for not starting him earlier.

Gary got no starts during his rookie year and only four starts after that. Finally getting the starting job last year, Gary put together an incredible season, forcing fumbles, making tackles, and getting to quarterbacks. If he follows this up with a duplicate performance next year, the awards will finally start rolling in.

Gamers who are wanting the franchise mode to make improvements can’t control the developers but they can pick up players. Snagging Darius Leonard would be a huge way to improve the enjoyment. He’s young but already considered one of the best left outside linebackers every year.

When it comes to big-time threats and pressure, few players deliver outright terror like Chandler Jones. The Super Bowl winner with the Patriots has put together an incredible career in both New England and Arizona. Since 2015, he’s made every other Pro Bowl.

The Cardinals are planning on big things and Chandler Jones is a huge part of that. As a player who has led the league in sacks, tackles for loss, and forced fumbles before, one big year from the star could finally be the spark the Cardinals need.

In seasons where Joey Bosa plays all of the games, he’s never racked up less than 11.5 sacks. Unfortunately, that has only happened twice in his career. Despite injuries plaguing him, Bosa puts up huge numbers, even when he does miss games.

In fact, in six years, Bosa has made it to four Pro Bowls, including every one of the last three. When he plays for entire seasons, he contends for Defensive Player of the Year, so watch for him to potentially rise higher on this chart.

This list has many middle linebackers that didn’t get the recognition they deserved. Thankfully, Bobby Wagner has been established by gamers and voters as one of the league’s best and it’s easy to predict the rating of his being high. For the past eight seasons, he’s made the Pro Bowl as a veteran of the Legion of Boom.

Moving from the Seahawks to the Rams, he could make the Super Bowl champs even better, which is a scary thought. He’s led the league in tackles, solo tackles, assisted tackles, safeties, and defensive touchdowns before, so there is nothing he can’t do.

Despite being ranked so highly, Lavonte David is yet another middle linebacker who doesn’t receive the accolades he deserves. His single Pro Bowl appearance from 2015 may make gamers think he’s past his prime or simply on the verge of greatness.

David, over a ten-year career, has never once gotten less than 87 combined tackles in a year. When amateur fans try to say that Tom Brady singlehandedly won a Super Bowl for Tampa Bay in 2020, remind them that David locked down that defense.

From 2015 through 2020, no player terrorized offensive backfields like Khalil Mack. During that time, Mack was in overdrive, improving as the season went on, racking up Pro Bowl nods in each year, and winning Defensive Player of the Year once (2016).

After the Las Vegas Raiders and Chicago Bears marveled at his services, Mack finds himself in Los Angeles. The Chargers fanbase should be ecstatic as they will have two top-ten outside linebackers; no other team can boast this kind of pass rush.

It’s hard to epitomize how overlooked middle linebackers are quite like Demario Davis. Despite leading the league in solo tackles in 2017 and being an All-pro for the last three seasons, Davis has yet to attend his first Pro Bowl.

Thankfully, the ratings adjusters see his true value. He has been one of the major reasons that the Saints, even without Drew Brees, have stayed competitive. When quarterbacks plan for the Saints, the first person they need to account for is Davis.

Those who compare last year’s game to this year’s will find that Fred Warner remains the top-rated middle linebacker. As a middle linebacker, his top priority is tackling and he set a personal career high last season with a whopping 137 combined tackles.

Despite Warner’s improvement, Warner missed the Pro Bowl last year after making it in 2020. This has less to do with any kind of fictitious decline and more about how voters get sucked in judging picks and sacks over tackles, which are just as important.

Although T.J. Watt is the highest-rated linebacker, even those who don’t follow football or gaming closely might have heard the outcry when he was given a mere 96 OVR. This is the reigning defensive player of the year who just tied the single-season sack record last season.

Over the last two seasons, Watt has led the league in sacks, tackles for loss, and quarterback hits. When the franchise debuts another 99 OVR player, it had better be Watt. Being rated at 98 would have been disrespectful, sitting at 96 is something even worse.

SEGA Announces Sonic 3 The Movie And A Live-Action Series For...