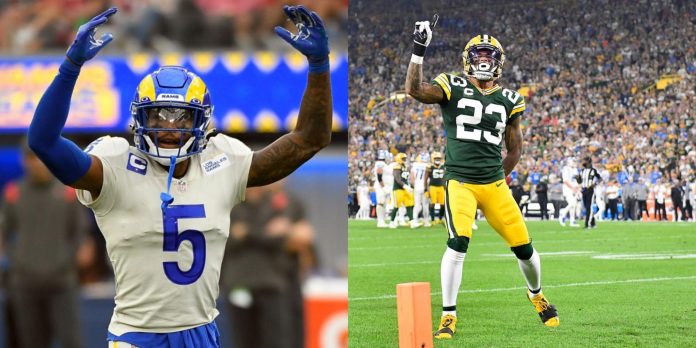 The value of a cornerback that can go toe-to-toe with the NFL’s best is invaluable. It’s easy to look at numbers like interceptions or passes defended and think this is what a great corner can do. But in Madden NFL 23, veterans know that an elite cornerback contributes to sacks and tackles as well.

The longer that a receiver is covered, the longer the offense has to hold onto the ball, creating more pressure and sacks. Plus, if they can shut down an opponent, this means the safeties and linebackers in Madden NFL 23 are free to blitz without worry.

There hasn’t been much to cheer for in Atlanta over the last few seasons. As stacked teams have consolidated their talent, the Falcons have seen their best players in Matt Ryan and Julio Jones go away. But the emergence of A.J. Terrell Jr. gives some much-needed hope for the franchise.

Terrell was a second-team All-Pro in only his second season. Starting sixteen games, he batted down sixteen passes and picked off three more. If the Falcons are going to rebuild, it seems they have their elite cornerback to build around.

Here’s a weird statistic for a cornerback to have: In 2020, Marlon Humphrey forced a league-leading eight fumbles. That’s one every other game. Cornerbacks aren’t supposed to be doing that. But that’s just what Humphrey did to gain his second consecutive Pro Bowl nod.

Last season was cut short by a torn pectoral muscle, but Humphrey is still in his prime. He plays almost like a linebacker with the way he collects tackles. It’s those extra things that make him so critical to the Ravens on defense.

J.C. Jackson won the Super Bowl four years ago with the Patriots in his rookie season. That’s one way to tell the league he’s ready for the big spotlight. Since then, he’s had solid seasons and finally made it to his first Pro Bowl last year.

Jackson isn’t known for his hands, but he did just record his first forced fumble and his first interception last season. That’s in addition to his specialty, batting down passes, a category in which he led the league in.

It’s surprising that teams aren’t holding onto Stephon Gilmore for longer. Despite Pro Bowls in five of the last six years, leading the league in picks and deflected passes, winning the Super Bowl, and winning Defensive Player of the Year, Gilmore will be joining his third team in three years.

Usually, players this hot get locked up to long-term contracts, but the Indianapolis Colts have happy to see other teams dropping the ball (pun intended). Gilmore, when he’s healthy, is a top-tier talent that deletes even the best receivers from contention.

Marshon Lattimore came onto the scene in 2017 and immediately became of a superior defender for the New Orleans Saints. In his rookie year, Lattimore was named Defensive Rookie of the Year and made the Pro Bowl.

Since this time, he hasn’t slowed down. In fact, he’s made the Pro Bowl for each of the last three years in a row. Opposing QBs know not to test him, which prevents his stat box from being stuffed, but he’s always good for a few deflected passes and picks each year when the passers forget about his power.

The Cleveland Browns went into last season with betters expecting them to win the Super Bowl. Not only didn’t that happen, but the team failed to even be average. There are a lot of players and coaches to blame for the failure but nobody can blame Denzel Ward.

As a shining spot in a miserable season, Ward was a superior lockdown defender and returned an interception 99 yards for a touchdown at one point. When comparing last year’s game to this year’s, if Ward stays as dominant as he has been, the Browns will be much more pleased with the outcome.

In the last five years, Darius Slay Jr. has made it to the Pro Bowl four times, a remarkable stretch of dominance. In 2017, Slay led the league in interceptions and passes deflected. But he’s still in his prime; he led the league in defensive touchdowns last year.

When expecting big changes in franchise mode, don’t downplay Slay’s durability. In his nine-year career, he has never played fewer than thirteen games in a season. That’s as dependable as it gets. Sign him up and don’t worry about backups.

The Buffalo Bills were on pace to win the Super Bowl last season before Tre’Davious White went down with an ACL injury. Given how close they came, it’s impossible to deny they would have been very close to a title if White was healthy.

Coming off of an injury, White will be doing some improving as the season goes on. When healthy, he’s led the league in picks before, so he’s more than capable of leading the Bills’ defense to glory.

It can be hard to predict where the top players will land in the ratings when they are coming off an injury. In 2020, Jaire Alexander got his first Pro Bowl nod. Unfortunately, he only played four games in 2021 before injury cut his season short.

If he returns with the same strength as before, Alexander is still one of the best. The Green Bay Packers are shooting for another Super Bowl title. If Aaron Rodgers will carry them on offense, it’s Alexander that will do the heavy-lifting on defense.

One of the most difficult parts about measuring great cornerbacks is that their contributions are oftentimes unmeasured. Quarterbacks learn to throw nowhere near the player and therefore reduce the number of statistics they can compile.

If the developers reveal another 99 player, it should likely be Jalen Ramsey. Even with few opportunities, Ramsey tied his career high with four picks last season and reduced the best receivers to a blip on the radar. He’s currently the undisputed best corner in the NFL.

Kevin Feige tried to get details about Batgirl from the directors...