Home Entertainment Madden NFL 23: The 10 best defenders in the ranking 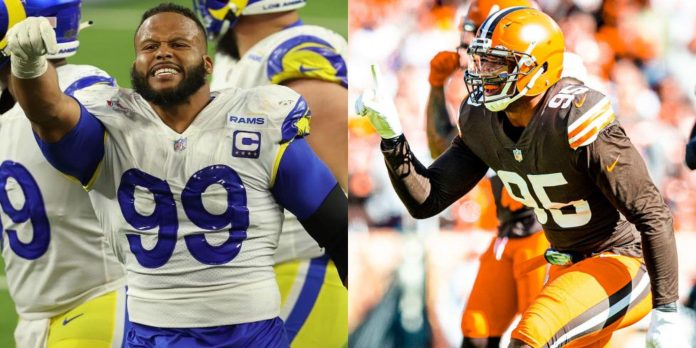 Generally speaking, an offensive lineman and defensive lineman of the same caliber will result in a net tie that goes to the offense. In their careers, Hall of Famers on the O-Line have single-digit sack and tackles for loss totals against them. But that’s not to say that a D-Lineman in Madden NFL 23 isn’t as valuable.

These elite talents often draw extra blockers, which free up other members of the defense to do some damage. They may not be stuffing the stat sheet like their teammates, but hardcore Madden NFL 23 gamers are well aware that these are the guys doing the work regardless of who is getting the credit.

Being a Pro Bowler for multiple teams indicates that the player is not merely a result of their system. DeForest Buckner has accomplished this feat for the 49ers and just last season for the Colts, proving his worth beyond his supporting cast.

That’s not an easy thing for defensive tackles to do. But Buckner, unlike most in his positions, shows up on the stat sheet more often than not. His combined tackles have never been lower than 58 in any given season.

While everyone is getting distracted by Patrick Mahomes and the offensive stars for the Kansas City Chiefs, the defensive side of the ball has had to work miracles to keep the group in perennial championship contention. That group is spearheaded by Chris Jones.

As a disruptive defensive tackle, Jones has made the last three Pro Bowls, directly coinciding with the Chiefs’ return to dominance. That’s no coincidence, Jones’ disruption frees up other players to pressure quarterbacks and tackle running backs earlier than usual.

Getting sacks is a bit of a tall order as a left end since right-handed quarterbacks will have the player in their vision the entire time. That hasn’t stopped Jordan at all, registering at least eight sacks per year since 2012.

When players get Super Bowl titles with different teams, they’re usually more than just a role player. Von Miller proved that he can still be among the best after his Super Bowl MVP performance with the Broncos. The Rams were grateful for his pressure.

Now he’s with a third contender hoping to stack the odds in their favor. If they get a full-strength Von Miller, the Buffalo Bills will be the favorites to win the Super Bowl, even with a loaded AFC.

The Washington Commanders had a lot of surprises last year, almost all of the were bad. Between the injuries and stars failing to live up to expectations, very little worked out in their favor. Jonathan Allen was a colossal exception to the bad luck.

Allen made his first Pro Bowl last year. Nine tackles might be alright for a defensive end or outside linebacker, but it’s eye-popping as a defensive tackle. If Allen can do this from the middle of the line next year, the Commanders could be playoff-bound.

It can be challenging to predict to the top-rated players will be. Vita Vea made his first Pro Bowl last year, so analysts knew he was good. But it was quite shocking to see him be the top-rated defensive tackle in the entire game.

It’s not that this honor wasn’t deserved, it was just so sudden. He was a huge part of the Buccaneers’ Super Bowl win and followed up that season with another strong one. He had career highs in sacks, solo tackles, and passes deflected last season, so the best could very well be yet to come.

While it’s totally fair to recognize that T.J. Watt is one of the best players in football, it should not be ignored how much Cameron Heyward contributes to his success. Heyward requires multiple blockers, freeing his teammate up to do some serious damage.

Since 2017, Heyward has made every single Pro Bowl and is a Steelers icon. When comparing the current game to the one last year, few players have the consistency that Heyward does. He acts as a modern iteration of the Steel Curtain.

If player OVR was more based on recent production, Nick Bosa may actually lead this list. His Defensive Rookie of the Year and Pro Bowl nod in 2019 was only a taste of things to come. This last season, he got a second nod for the Pro Bowl and shattered his career highs.

The forced fumbles, tackles, and sacks were all personal highs, and his 21 tackles for a loss led the entire league. Want to shake things up in franchise mode and free agency? Find a way to get Bosa signed on the team. He’s a huge presence.

Coming onto the scene hot, Myles Garrett started off making the Pro Bowl and has only gotten better. This last season was his best as he recorded 16 sacks and 51 combined tackles, both career highs for him.

If players are permitted to progress midseason, Garrett could see his stock rise even further. Though his OVR can’t get any higher as the ratings adjusters saw fit to give him a perfect 99 for now. If he plays up to this rating, Garrett and the Cleveland Browns are going to be tough to beat.

If it was possible to be a 100 OVR player, Aaron Donald might just be that player. Since he was drafted in 2014, Donald has been to every single Pro Bowl and won the Defensive Player of the Year award three times. When he was revealed to be a perfect 99 OVR again, no one was shocked.