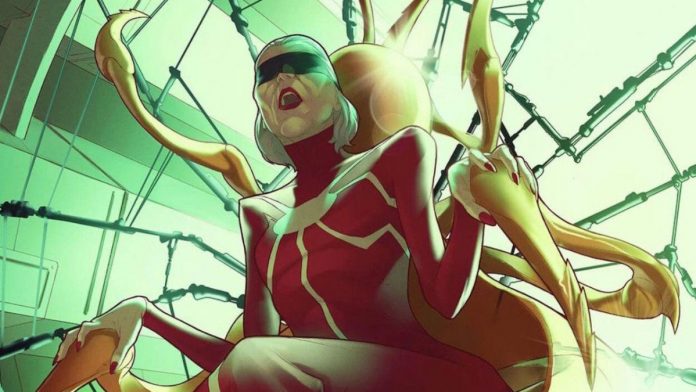 Sony’s Spider-Man Universe is continuing to expand. For now the franchise consists of just two branches – Venom and Morbius – but that is set to change quickly. At the start of 2023, movie-goers will have the opportunity to see J.C. Chandor’s Kraven The Hunter, and just a few months after that will see the arrival of S.J Clarkson’s Madame Web. And while the latter is a project with many details that are being kept secret for now, one thing that we do know about it is that it’s building an ensemble cast with a lot of talent.

Announced in 2019 and based on a screenplay written by Matt Sazama & Burk Sharpless (Dracula Untold, Gods of Egypt), Madame Web is set to start production in the second half of 2022 in preparation for its upcoming 2023 release, and it has been very busy on the casting front. Below we’ve catalogued all of the actors who have signed on to the comic book blockbuster thus far, and, in cases where possible, the roles they will be playing.

Dakota Johnson’s star has been rising in Hollywood ever since playing the lead in the Fifty Shades Of Grey trilogy, but in the last few years she has been making waves in indie movies, and now she is ready to make her first comic book blockbuster. Johnson will star as the titular lead in Madame Web, though it is expected that the character will be extremely different from the comics (where the clairvoyant hero is an elderly woman with a neuromuscular disease that requires her to be connected to a spider web-esque life support system.

To this point in her career, Sydney Sweeney is best known for her work on the small screen – the actor presently starring in Euphoria and also having popular titles like The Handmaid’s Tale, Sharp Objects, and The White Lotus on her filmography. She has had some interesting feature appearances, having a small part in Quentin Tarantino’s Once Upon A Time In Hollywood, but Madame Web is expected to be her most significant film role to date. As is the case with all of members of the cast that will be mentioned in this article, we presently don’t know what character Sweeney will be playing.

It was revealed in late June 2022 that Emma Roberts has joined the ensemble in Madame Web. It’s the actor’s first big screen franchise project since her stellar turn in 2011’s Scream 4, and in the years since she has found a niche for herself with small screen horror. This started with American Horror Story in 2013 (which she appeared on for multiple seasons in multiple roles), and expanded in 2015 with the series Scream Queens.

Despite only being in her early 20s, Isabela Merced is the most experienced member of the Madame Web cast when it comes to starring in franchises. The actor got her big break starring on the series 100 Things To Do Before High School, but her big screen resume includes roles in Transformers: The Last Knight, Sicario: Day Of The Soldado, Dora And The City Of Lost Gold, a voice role in The Nut Job 2: Nutty By Nature, and most recently the reboot of Father Of The Bride. She shows a lot of different skills in all of those movies… but we have no idea how any of them might apply in Madame Web given that we know nothing about the character she will be playing.

Between his roles in Jacques Audiard’s A Prophet and Kevin Macdonald’s The Mauritanian, Tahar Rahim has proven that he can deliver a phenomenal performance when given the right material, and we can hope that Madame Web provides it for him in his undisclosed role. Most of the film work that Rahim has done has been in his home country of France, so it will be interesting to see what drew him to make his first American comic book blockbuster.

Rounding out the cast of Madame Web (for now) is Celeste O’Connor, the Kenyan actress who made her feature film debut in 2017 with a role in Wetlands opposite Heather Graham and Adewale Akinnuoye-Agbaje. She followed that up with two streaming movies – 2018’s Irreplaceable You and 2019’s Selah And The Spades – and then had roles in both 2020’s Freaky and 2021’s Ghostbusters: Afterlife. She’s most recently completed work on Zach Braff’s latest directorial effort, A Good Person, which co-stars Florence Pugh and Morgan Freeman.

Fans can look forward to more names being added to the cast of Madame Web as the film moves further through its production schedule, and as more stars are announced we will continue to update this article. In the meantime, everyone excited for the project can start counting down the days until its release on July 7, 2023.

Spider-Man No Way Home: Art Of The Alternate Ending With Mysterio...