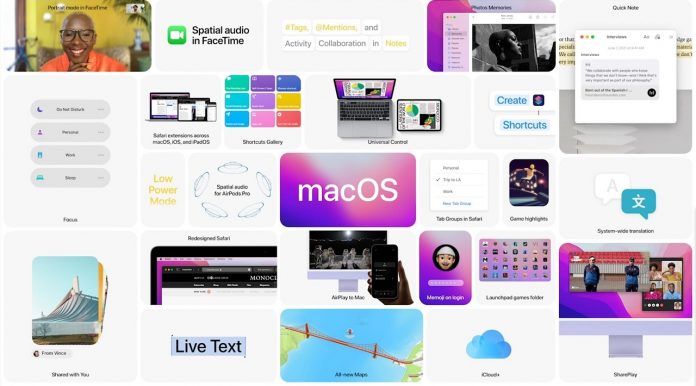 In the event, which took place online due to the global pandemic, Apple’s new products and services, as well as new versions of the long-awaited operating systems such as iOS, iPadOS and watchOS were announced.

One of the highlights of the event was the new macOS 12 version. macOS, which has been used successfully on all computers of the company for many years, takes on a completely different form with its new version. Here is macOS 12 with its remarkable innovations…

The highly anticipated WWDC 2021 has finally begun. Apple, which managed to make a sound with its moves in the computer world, announced the macOS 11.0 Big Sur version at the event it held last year. Unlike this version, the name of the new operating system was kept secret by the company for a long time. With the announcement of the operating system, the name of macOS 12, which was curious by users, was also revealed: Monterey!

The first of the features that came with the new operating system was Universal Control. This new feature, which allows you to use your Mac and iPad device at the same time with a single mouse and keyboard, allows you to easily move any file between your devices. This feature will be able to work on up to three devices at the same time.

AirPlay feature, which Mac users have been waiting for a long time, also comes with macOS 12 Monterey. Thanks to AirPlay, you can easily transfer images from your iPhone and iPad devices to your Mac wirelessly. On the other hand, you will be able to play music or podcasts by taking advantage of the high sound quality of your Mac.

The Shortcuts application, which allows users to automate daily tasks and access them faster, has finally arrived on Mac devices with macOS 12. Just like on the iPhone and iPad, Shortcuts on Mac devices will allow users to quickly complete tasks with the apps they use the most.

The Shortcuts app, which is integrated across the entirety of macOS, including the menu bar, Finder, Spotlight and Siri, and even hands-free, allows the user to easily run these shortcuts no matter what app they are in. If you wish, you will also have the opportunity to design your own shortcuts.

In the Notes app for macOS, users will be greeted with improvements in collaboration and organization. These will include extensive features such as tagging another user and providing them with notifications. Thanks to the Quick Notes feature, users will have the opportunity to easily take notes from any system-wide application or website. On the other hand, notes taken quickly on iPad and Mac devices can be easily viewed and edited on iPhone devices.

Along with macOS 12, the Safari application was also developed. Having become more compact, Safari offers its users a more comfortable toolbar experience. On top of that, with macOS 12, you will have the opportunity to divide tabs on Safari into groups. After this new feature called tab groups, Safari will have a simpler and cleaner design with the combination of tabs and URL bar.

With the new feature, open tabs are divided into groups according to their types. In this way, users will have the opportunity to find the desired tab among dozens of tabs by clicking on the section in the upper left. On the other hand, the feature, which is expected to work simultaneously with iPad and iPhone devices via iCloud, can be shared with other users if you wish.

Apart from this, let’s say that a plug-in standard that works compatible with all browsers that has been expected for a long time has been brought to Safari. Thanks to this feature, there will be no separate plugins for each browser. A developed add-on will be able to work easily in all browsers.

One of the innovations that Apple announced with macOS 12 Monterey is the Focus feature. With this feature, users will have the ability to automatically filter notifications that are not related to their current activity. As soon as this feature is turned on, notifications will be automatically filtered on users’ other Apple devices. This innovation will be especially useful for users to focus on a single point such as homework, presentation and meeting. Apart from that, other users will be able to understand whether you are available or not thanks to the Focus feature.

On the other hand, some of the features announced with iOS 15 also come for the macOS 12 Monterey operating system. Grid view and portrait mode for videos in FaceTime, as well as spatial sound and adaptive sound isolation, will be available for Mac devices with the new version.