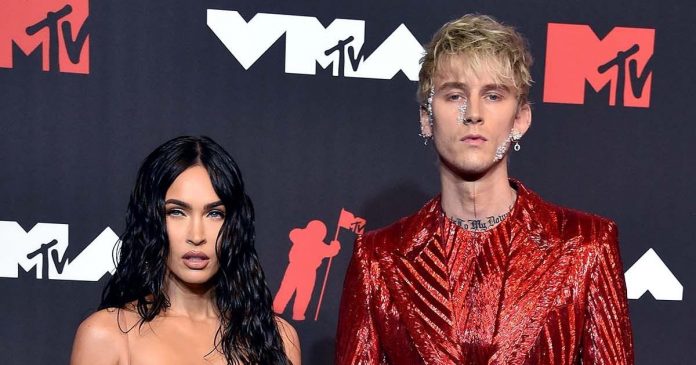 A terrible moment in their relationship. Machine Gun Kelly recalled an incident when he was thinking about suicide while talking on the phone with Megan Fox.

The 32-year-old “Emo Girl” singer described the crisis in detail in his new Hulu documentary “Life in Pink,” which premiered on Monday, June 27. The Texas native, whose real name is Colson Baker, said the dark moment happened in July 2020. after the death of his father, with whom he had recently reconciled.

“I didn’t leave my room and it was getting very, very, very dark,” the “Big Teen” star recalled in the film. “Megan went to Bulgaria to shoot a movie, and I got really wild paranoia. Like, I kept getting paranoid that someone would come and kill me.”

The Papercuts rapper went on to say that he always slept with a shotgun by his bed, but that day he “just snapped.” He called the 36-year-old Fox, whom he met in March of the same year during the filming of “Midnight in Millet”.

“I thought: “You’re not here because of me.” I’m in my room and I’m crazy about her,” recalls Kelly. “Dude, I put a shotgun in my mouth. And I’m yelling into the phone and like a barrel in my mouth. And I go to cock the gun, and the bullet, when it comes back, just jams the cartridge case. Megan is silent as if dead.”

The Billboard Music Award winner said that this moment made him realize that “something is wrong.” The “Jennifer’s Body” star and Kelly’s daughter, 12-year-old Casey, stepped in and helped him realize that he needed to change something.

«[They said], “I want, for example, to see you as my father” and “I want to see you as my future husband,” and I was like, “I need to quit drugs for real, this is the time,” said the musician “Bloody Valentine”. (He did not specify whether he was using drugs at the time of the incident.)

Later that year, Kelly told Interview magazine that he was seeking treatment for substance abuse and mental health issues.

“Currently, my favorite drug is happiness and commitment to art, not commitment to the vice that I thought art made,” he explained in November 2020. “I am taking steps. Last Thursday I had my first therapy session. This is the first time I’ve said, “Hey, I need to separate these two people,” i.e. Machine Gun Kelly and Colson Baker. This dichotomy is too intense for me.”

Two months later, the artist “Maybe” told fans that he took a break from social media while he was working on himself. “I just want to tell my fans that I personally have been in some damn place for a couple months in my head,” he said in an Instagram story for January 2021. “So I wasn’t that active on social media.”

The Dirt actor shared his excitement about the success of his Downfalls High project, which premiered recently. “I’m kind of stumbling,” he added.

Kelly and the New Girl graduate got engaged in January. Three months later, Fox revealed her fiance in an Instagram post posted on his birthday. “The world has no idea what a tender and beautiful heart you have,” she wrote then. “How generous and how caring you are. How ridiculously strange, clever and witty you are. You are by far the most unique person I have ever met. You’re such a beautiful soul. It is a great honor for me to love you and be the recipient of your love.”