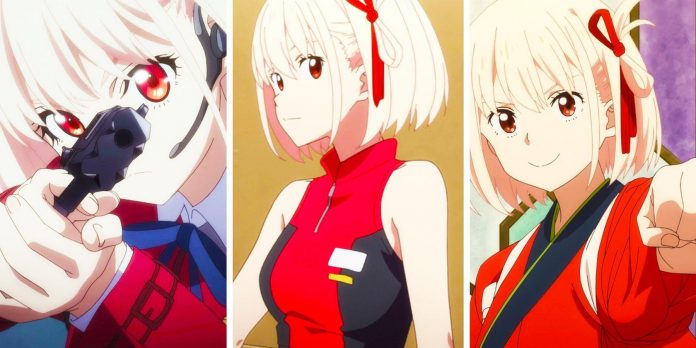 While Lycoris Recoil gets its popularity thanks to its concept of “Pretty Girls with Guns”, in fact there are other, much deeper themes that it tries to convey, namely “Talent” and “Live to the Fullest”. Takina is upset when she was kicked out of Lycoris headquarters because she felt she wouldn’t be able to reach her full potential if she worked in a small branch like LycoReco Cafe. On the other hand, Chisato is universally recognized as the most talented agent of Lycoris, and yet she was happy to leave the tough headquarters and work at LycoReco, because she prefers to do everything her own way, even if most people think that her abilities are wasted there.

The Alan Institute is a secret organization that provides all kinds of support to those whom they consider talented people. It all started many years ago, when a man named Alan Adams helped an impoverished artist not only get back on his feet, but also to flourish. Since then, the name Alan has become a symbol of anonymous support for talented artists. Soon after, the Alan Institute was founded with the main mission of supporting those who can lead the world to a better future.

In confirmation of their ambitious mission, their support began to extend not only to the arts, but also to other fields of knowledge, such as science and sports, among others. The type of support provided is also different. Some receive financial support, others are given access to the tools and opportunities they need, and there are even people who receive modern medical care. The recipient of the Alan Institute’s support is usually kept secret, but there are also recipients who decide to make their status public. The only mark confirming their title of laureate is a pendant with a small gilded owl as a decoration.

Having a Nobel Prize winner, bestselling authors and even Olympic athletes, it would not be an exaggeration to say that the Alan Institute is really changing the world for the better. At the same time, people begin to doubt the legality and ethics of the Institute because of its secret nature. After all, no one knows who is supported by those people whom the Alan Institute decides to support, what their support is based on, where the money comes from and many other questionable things.

Chisato’s greatest ability is definitely her extremely sharp eyesight. As soon as she focuses her attention on something, her eyes will not miss a single thing that is about to happen to this object. This is basically the reason why she can easily dodge bullets. Even a point-blank shot can’t hit her.

Needless to say, great eyes are just the tip of the iceberg for Chisato. Because in a sense, what Chisato is doing is actually predicting the intentions of her opponents. Whether it’s shooting a gun or playing rock-paper-scissors, she is able to accurately predict what her opponent will do next.

She accomplishes this amazing feat by using her eyes to follow the micro-changes that happen to her opponents, such as the slight twitching of their muscles, the direction of their eyes, the change in the fabric of their clothes and a lot of tiny little things. this may signal their immediate intention.

Not only that, it also takes into account their psychology, for example, whether they are in a state of panic or not, whether they are trained shooters, whether there are any habits or behaviors when they fire their weapons, and so many other little things. hints. That’s why it would be easier for Chisato to predict the movement of a professional, because they usually use a strict and predictable range of motion. At the same time, it would be easy for her to predict the behavior of someone she already knows. What’s even crazier is the fact that all these things happen in a split second.

Based on the previous paragraph, we can assume that Chisato stands out in three main categories. She has eyes that can catch every minute detail, she has a brain that is able to calculate all this information in a matter of seconds, not only to predict what her opponent is going to do, but also to decide what to do. this is the best answer she should accept. Last but not least, Chisato has the strength, speed, and athleticism needed to complete these answers.

The Alan Institute, through Shinji Yoshimatsu, noticed these extraordinary abilities and decided that Chisato had a unique talent for one particular thing, namely to become a killer, a murderer, a murderer.

Batman will fight the Spanish conquistadors in the new HBO Max...