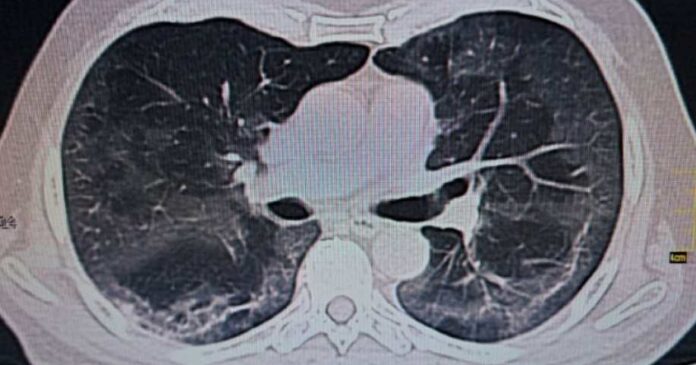 In Italy, one of the countries with the most severe coronavirus epidemic, scientists who examined the lungs of COVID-19 patients who died after intensive care for up to 40 days observed that the structure of the lungs was completely impaired and unrecognizable.

COVID-19, an infectious respiratory disease caused by the SARS-CoV-2 virus, can cause serious damage to the lungs of infected patients. Most people suffering from infection heal without mild to moderate symptoms and need special treatment, but the course of the disease is very harsh in elderly and chronic ill people.

According to the report of Independent Turkish, scientists examined the lungs and other organs of patients who lost their lives after being in intensive care for up to 40 days in Italy. Professor of King’s College London, who presented the findings to the Science and Technology Committee of the British Parliament on Monday. Dr. Mauro Giacca said that COVID-19 harms the lungs beyond recognition.

“In the autopsies we performed, we encountered lungs and fused cells whose structure was completely disrupted”

In their autopsies, they stated that they encountered fused lungs and fused cells with high virus density. Dr. Giacca said, “You see very large thromboses (blood clotting). There is a complete disruption in the lung structure. So, in some ways, you can’t even understand that these were once lungs. This information is largely lacking in the literature, since there is no autopsy worldwide “.

“There are many and very large cells that are fused. These cells are positive for the virus and have become 10, 15 nuclei. ” Dr. Giacca said they believe this explains the unique pathology of COVID-19. Stating that the new type of coronavirus responds very difficult to treatment, Prof. Dr. He added that antiviral therapy may work in the early stages of the disease, but it is unlikely to have medication for COVID-19 patients.

“Very unlikely to be available for COVID-19 patients”

Sir John Bell, a medical professor at the University of Oxford, who works on the British government’s anti-coronavirus committee, said, “If we think that the quarantine measures have been greatly loosened, that we are now starting to move again, and we are still decreasing rapidly, we can still avoid the second wave. ” said.

On the other hand, Prof. Dr. Bell announced that additional experiments of the COVID-19 vaccine that Oxford University is working on will be conducted in Africa. Stating that the continent has not yet reached the number of cases and deaths similar to those in Europe and America, the scientist said that it will probably reach the highest level of infection in Africa in July.

The coronavirus vaccine developed by Oxford University is expected to be available in the fall. Apart from that, there are at least 134 different COVID-19 vaccines currently being developed worldwide, but at least 125 of them are still in the first stage. In short, it is far from usable.

Corona Virus Warning: Stay at least 2 meters away from anyone...