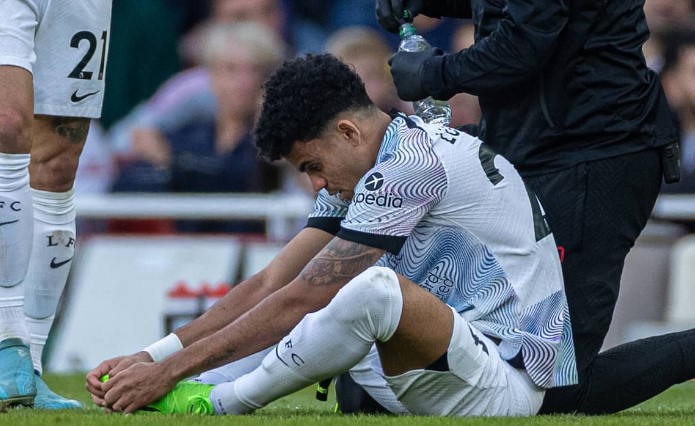 The loss of Luis Diaz before the end of the World Cup is a big blow for Liverpool, but there may be good news when it comes to the winger’s knee injury.

Liverpool put up a great fight in their 3-2 final defeat to Arsenal, but more worrying than the loss of points was the problem of Diaz — perhaps still a young player of the club — who was forced to leave the field in the first half with a clear advantage. Left knee injury after a fight with Thomas Partey.

Initially, Diaz was able to continue playing after writhing in pain for several seconds and was examined by a physiotherapist. However, when he returned to the field, he fell again.

The 25-year-old, being a super athlete, asked the physiotherapist to simply bandage his knee and let him play, but at that time it was impossible.

After the match, Diaz left Anfield on crutches with his knee in a brace — a bad sign, since club physiotherapists will have a pretty good idea of the severity of the knee injury using manual tests, especially to check for ligament damage.

In addition, Jurgen Klopp noted that the injury did not look very good and, in fact, became the cherry on top of a disappointing Sunday.

In the following days, Diaz underwent further examination and imaging (probably an MRI).

Based on these findings, it was reported that Diaz will not require surgery and will miss approximately six to eight weeks, which is why he is out before the winter break at the World Cup, missing a total of 10 games.

So what’s going on with Diaz’s knee?

The club did not provide complete information, so, naturally, it is impossible to find out specific details or give an accurate answer without being involved in the inspection, visualization, and so on.

However, based on the video review and key details, we can connect some points together.

The video of the actual collision between Diaz and Parti shows little — the angle is too large, which hides any corresponding turn or knee movement.

Diaz’s reaction after the incident was to grab the inside of his knee. Initially, this suggested that he had received a blow to this medial (internal) aspect — painful, but usually not such a big problem.

However, then physiotherapist Chris Morgan went out to check the knee and performed a special test called the valgus stress test, which causes tension of the medial ligaments of the knee, in particular the medial collateral ligament (MCL).

These tests by no means say everything, but they probably told the physiotherapist that it is not a severe degree, a complete rupture (rupture) of the 3rd degree, which causes instability and a strong level of pain.

In this case — and remember that the physiotherapist makes all these decisions on the spot in a tense environment, so it’s not easy — Diaz was allowed to play on.

But his response subsequently also becomes another indicator of seriousness.

If he can play on, then it could just be a quick sprain of ligaments or structures without problems. If not, it may hint at something more.

So when Diaz fell down again, the decision was made, and the physiotherapist told him that he could not continue playing, even with bandages.

What testing can give us ?

After Diaz was removed, he probably underwent further testing in the locker room with constant monitoring of his pain levels, swelling and ability to move (in particular, walk).

Based on these indicators — and again, these are just indicators, not exact science — he was put on a limited load with crutches and on a knee in a bandage.

Taking all this into account, the most likely injury is damage to the MCL, which is one of the four main stabilizing ligaments of the knee and specifically protects against uncontrolled valgus (internal) force and restricts the knee from bending inward.