Home Sport Luis Diaz is out of the game before the end of the... 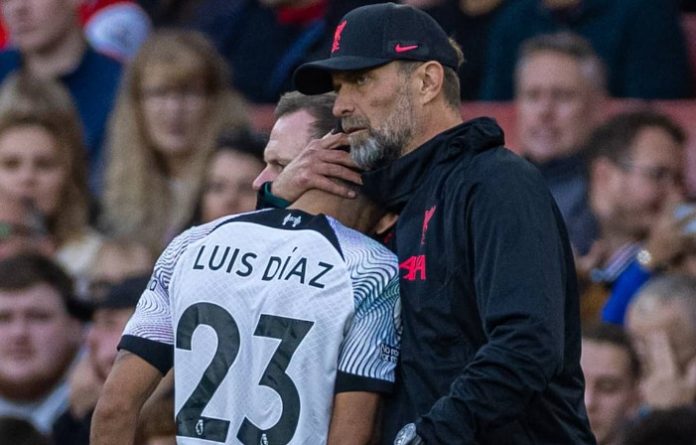 Luis Diaz is out of the game until the end of the World Cup due to a knee injury he sustained in Sunday’s 3-2 match against Arsenal.

Diaz, one of the few bright spots in a terrible season, limped off shortly before half-time after Arsenal midfielder Thomas Partey landed on his knee.

The 25-year-old winger left the Emirates Stadium on crutches and wearing a knee brace, and now reports on Monday evening confirmed that he has six to eight weeks left.

This means that he will miss all 10 remaining matches before the break for the World Cup, which Colombia does not qualify for.

Colombian journalist Pipe Sierra confirmed the news after a preliminary investigation on Monday.

It is expected that further examination will take place on Tuesday, when the full scope and more detailed information will be known.

Diaz’s injury will not require surgery, and injury experts have suggested that he suffered an injury to the MCL (medial collateral ligament).

Jurgen Klopp will hold his pre-match press conference in front of Rangers on Tuesday evening (19:30) and will undoubtedly provide additional information.

“Luis Diaz, it doesn’t look good,” Klopp said after the match on Sunday.

Diaz will miss key matches against Man City and Tottenham in the weeks when he will be sidelined.

In his absence, Diogo Hota will probably have to switch to the left wing position from which he began his career at Liverpool.

It is hoped that Diaz will be able to return after the World Cup, having played the fourth round of the League Cup, and then the Boxing Day match against Aston Villa.

Liverpool are also awaiting news on the extent of Trent Alexander-Arnold’s injury.