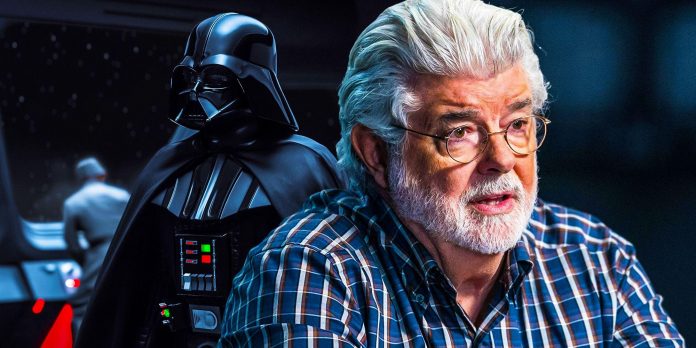 George Lucas initially had a significantly different version of the Sith in mind for the Star Wars saga, putting Darth Vader in a greater position of power but preventing notable twists in the franchise. The Sith Order is, collectively, the ultimate antagonist in the Star Wars franchise, fighting almost perpetual wars against their ancient enemies, the Jedi Knights, and subjugating the galaxy under brutal autocratic rule at different points in its history. Darth Bane’s dynasty of Sith Lords, which adheres to the Rule of Two, is the most well-known contingent of Dark Lords, but George Lucas had a distinctly different idea of who the Sith were at the time of A New Hope, which could have resulted in a very different saga.

In both the canon and Legends Star Wars continuities, the Sith Order once had scores of Dark Lords facing off against the Jedi Knights in direct combat, but this brutish approach proved ineffective against the Jedi over time. Darth Bane reinvented the Sith Order with his Rule of Two, making them embody their sinister philosophies more closely and defeating their enemies from the shadows. The deadliest and most ruthlessly intelligent of the Dark Lords, Palpatine, famously used Bane’s methods to wipe out the Jedi Order and twist the Republic into the authoritarian Galactic Empire, alongside his apprentice, Darth Vader, who was second only to Palpatine himself within the Empire’s hierarchy.

Related: Star Wars Had A Sith As Powerful As Palpatine After The Skywalker Saga

Fascinatingly, the word “Sith” is never said in any of the theatrical cuts of the original Star Wars trilogy. If one only views the films, they would have no concept of the Sith until the prequel trilogy, since Vader is seemingly framed as only a former Jedi who has fallen to the dark side and serves the Emperor, who is only a dark side user with no affiliation to the Jedi. Deleted dialogue and Legends material, however, reveal that this has never been the case. The concept of Sith, who have a myriad of philosophical and historical differences from the Jedi, has always been a part of the saga. Timothy Zann, notably, almost redefined the Sith in the Thrawn Trilogy but was blocked by Lucasfilm to ensure that the Expanded Universe remained consistent with the films. Despite this, Lucas had a different definition of the Sith in A New Hope.

As revealed in the 1976 novelization of A New Hope, Palpatine was originally going to lack a connection to the Force or its dark side, and while he became the Republic’s leader through political savvy, he’s soon revealed to be a puppet of his appointees upon declaring himself Emperor. This made Imperial leaders like Grand Moff Tarkin and Darth Vader the true rulers of the Empire until Palpatine was retroactively made a brilliant leader and Sith Lord in the saga’s further installments. But the novelization also describes Darth Vader as not being the only Dark Lord within the Empire.

Although the A New Hope novel doesn’t explain what exactly a Sith is, it does describe Darth Vader as being one of, if not the most powerful of them, implying that there are more of his kind within the Empire. Moreover, he is described as having been sent by the Emperor to oversee the retrieval of the Death Star plans (dialogue that was recorded for the film but deleted from the final cut). The implication in these descriptions is that the Sith were initially conceived as supremely powerful mystics within the Empire who served the Emperor directly, though his weakness and their position likely made them the most politically powerful and influential members of the fascist regime. This version of the Sith is similar to Imperial Inquisitors, but with far deadlier abilities and more ruling power.

Lucas’s original version of the Sith would have had a major impact on the films and later Star Wars works, particularly the canon sequel trilogy. In the original Star Wars trilogy, the twist that Darth Vader is Anakin Skywalker could still work, but another Sith Lord other than the Emperor would have to take his place as the main antagonist if he’s to retain his iconic redemption arc. The prequel trilogy would be significantly altered as well since Palpatine would be a political schemer but not the secret Dark Lord who corrupts Anakin. Palpatine most likely wouldn’t be the mastermind behind the Clone Wars either, with perhaps yet another dark side user taking his place.

Related: Return of the Jedi’s Ending Was Originally On Coruscant: Why Lucas Changed It

This version of the Sith would likely lack the Rule of Two as well, perhaps being a cult-like menace whose rivalry with the Jedi Knights doesn’t go as far back as their respective ancient histories. The canon universe’s sequel trilogy also wouldn’t be able to bring back Palpatine, as his resurrection relies on his status as the galaxy’s deadliest Dark Lord of the Sith. The sequels would have had to make more creative use of an original character like Snoke, who is initially framed as a wholly unaffiliated dark side user.

Is It Better Palpatine Became A Sith Lord In Star Wars?

While the idea of numerous Dark Lords of the Sith existing within the Empire is a fascinating concept, the saga ultimately benefits from what’s shown in the rest of the original and prequel Star Wars films. Palpatine is the definitive villain of the saga in both canon and Legends, and much of his appeal is owed to both his sinister Machiavellian manipulations in politics and his horrific actions as a Dark Lord of the Sith. The revelation that the Emperor is a more powerful Sith than even Vader in The Empire Strikes Back increases the scale of the film, and his chilling scenes throughout Return of the Jedi make him the perfect irredeemable replacement antagonist for Vader as well.

Having the Emperor himself be the greatest of the Sith Lords also prevents his presence in Return of the Jedi from being abrupt. If Palpatine was a weak-willed figurehead with no dark side powers, another Sith would take his place in the trilogy’s ending, and they would likely lack the background presence that Palpatine commands throughout A New Hope and Empire. Powerful dark side users within the Empire is a concept found in both the canon and Legends universe, but George Lucas changing the concept of Sith after A New Hope was overall beneficial to both Darth Vader and Emperor Palpatine in the Star Wars saga.