Home Entertainment Lucas Leiva Scores to Get Promoted to The Childhood Club – “A... 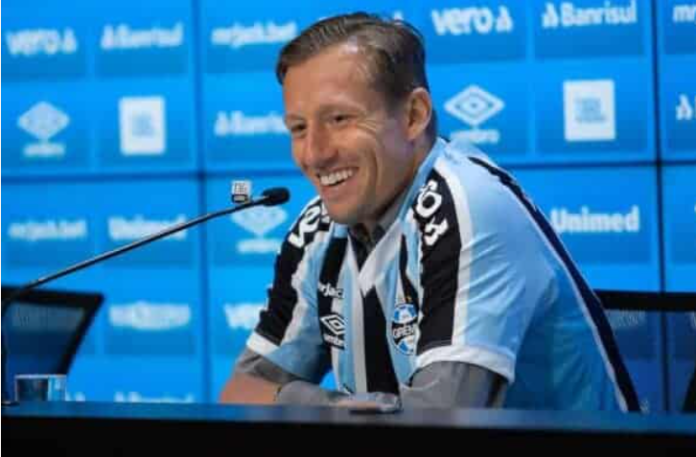 It was a fabulous end to his first season at Gremio for Lucas Leiva, who scored a rare goal and helped return to the top division of Brazil.

After 15 years of absence, Lucas emotionally returned to Gremio in June, rejecting offers from clubs with stronger positions than the Porto Alegre team in order to achieve one clear goal.

“It doesn’t matter to me where Gremio is, it’s important to be able to represent this team that means so much to me,” he explained when signing the contract.

Gremio dropped to the second level in 2021, taking 17th place, ending a 16-year period in the top division, and aimed for a quick return.

The signing of Lucas, whose contract with Lazio recently expired, was ambitious and marked a reunion with the player who left for Liverpool back in 2007.

It paid off: the 35-year-old footballer returned the club of his childhood to Serie A for the two remaining games.

Lucas, acting as a more advanced midfielder, participated in the first match for Bitello before Nautico’s Geuvanio received a straight red card for a challenge with spikes.

Just after the hour mark, Liverpool’s old number 21 doubled his team’s advantage by scoring from close range after a ghost run, forced to wait for a VAR check before he could celebrate his third goal since returning.

Bitello then completed it with a comfortable finish on the rebound, allowing Gremio to enjoy a return to Serie A.

“First of all, I want to thank Gremio for giving me the opportunity to experience a unique moment in the history of the club,” Lucas wrote on Instagram.

“I was able to help get up twice and I wanted Aflitos to be decisive. A movie flashed through my head when my shot made the score 2-0.”

The significance of the draw at the Estadio dos Aflitos Nautico stadium is connected with the historic clash between the two teams in 2005, when Lucas came off the bench in a game in which Gremio received four red cards, but still won 1-0.

“Next year will be full of challenges, but now is the time to celebrate with family, friends and fans.

“I want to thank everyone for the trust that brought me here, even with moments that I didn’t even expect to pass. Thanks. We’re back!”