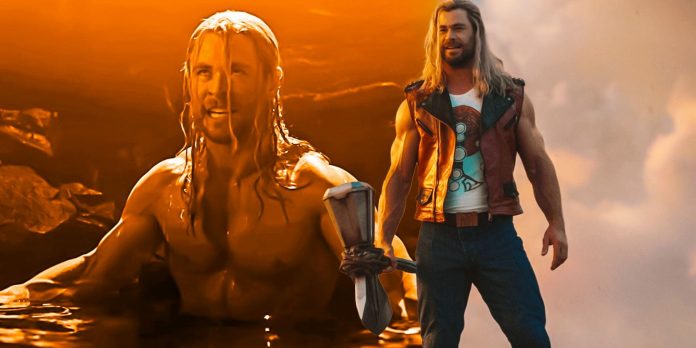 In the second Avengers movie, Thor reacted to hallucinations caused by the powers of the Scarlet Witch by finding Eric Selvig Thor, and then brought him to a mysterious pool, where he experienced a series of strange visions about the future of the MCU. This short scene ended with Thor returning to action and using his lightning bolt to activate Vision. Ultimately, this story proved to be a problematic addition to the Age of Ultron story, with many claiming that the film failed to properly explain what was going on and that it didn’t do enough to prepare Thor’s important decision. What went wrong can be explained by the fact that “Age of Ultron” director Joss Whedon originally included a much longer scene, but eventually removed most of it from the theatrical version.

Based on what is known about one of the locations featured in Thor: Love and Thunder, it is possible that Marvel will use the new film to return to the Age of Ultron’s Norn Pool. The MCU comics revealed that Tensberg (the place where the New Asgard was built) is located near the Norn Basin. And since the trailers of “Thor 4” have confirmed that the New Asgard will indeed be present in the film, Thor has a chance to re-enter the Norn pool. Such a move would make a lot of sense for his character, especially if you take into account his goal. It is already known that “Love and Thunder” will see Thor go in search of Gorr, the butcher god.

The unedited version of the scene helped shed light on the nature of the Norn Pool and how it can work in the story “Thor: Love and Thunder”. In the footage, Thor used the pool to consult with the Norns, three Asgardian witches capable of seeing the fates of various people existing in the universe. Having taken possession of Thor’s body, the Norns told Selvig what they saw in the future. Since this part was not included in Avengers: Age of Ultron, it could be included in Thor 4, albeit in a manner that would match the style of Taiki Waititi.

A visit to the Norn Pool may be the key to finding Gorr, Christian Bale’s butcher god, in the movie “Thor: Love and Thunder.” Given the number of gods that exist in the MCU, it goes without saying that tracking down his whereabouts and figuring out which pantheon he will strike next can be an almost impossible task. With that in mind, using the Norn pool may be the shortest path Thor will need to prevent Gorr and put an end to his killing spree. If the movie moves in this direction, Thor may get a bloody peak of Gorr activity in the MCU.

Pokémon Prepares Pokémon Day: One Announcement A Day Throughout The Week