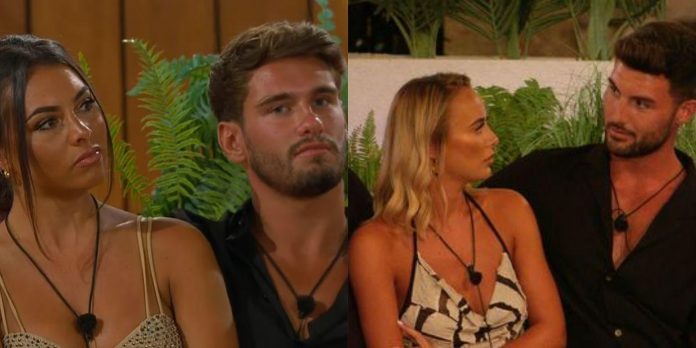 Casa Amor was first introduced as a twist back in the third season of Love Island, and since then, it has become the most highly anticipated event in the show each year. The infamous “stick or twist” recoupling ceremony has produced some shocking results over the years, with the current, eighth season’s standing as the most dramatic in the show’s history.

Loyal islanders have been left heartbroken after their partners twisted. Others stuck with their partners only for their antics in the sister villa to later be revealed. Some even decided to twist out of spite or as a means of self-protection.

It was clear to viewers that Shaughna was more invested in her partner that he was in her, so it came as no surprise when Callum moved on a Casa girl while Shaughna stayed loyal at the villa. Although it was a shock for Shaughna, it seems that Callum made the right choice as he and Molly Smith are still going strong.

Fans felt the sting when Laura Whitmore asked how Shaughna felt and she confessed that she “never should have trusted a scaffolder.” She also provided the season with its most iconic moment when she uttered the now infamous line, “Congrats, hon.”

Indiyah stated that she was glad she listened to her head and not her heart when she returned from Casa Amor with a new boy to find that Dami had also twisted. Despite intending to continue exploring their connection, her motivation for recoupling was to keep her options open and to protect herself from being hurt.

It wasn’t a shock that Dami recoupled with Summer given his antics in Indiyah’s absence, but his double standard at the recoupling was. She stayed loyal during her time in the sister villa, yet he branded them both “heartbreakers” in a shockingly icy exchange over the fire pit. Her iconic line, “May the best heartbreaker win” was the perfect response to this.

Toby’s head had already turned not once but twice before seeming to settle with tattoo artist Abigial, so it naturally came as a shock to viewers when his head turned for a third time at Casa Amor. Abigail kept her composure when Toby returned with Mary Bedford, but Chloe Burrows could not contain her surprise and disappointment.

The girls were not the only ones in shock, with Toby revealing that he expected Abigail to be stood with a new boy and almost seemed to regret his decision. In the most surprising twist, he binned them both off and got back with Chloe, and they have since been branded as one of the best Love Island couples ever.

Georgia provided the show with one of its most iconic reactions to a stick or twist result ever and put the words “I’m loyal, babes” on the Love Island map. Despite being clearly livid when Josh walked in with Kaz Crossley, she took a moment to compose herself before hitting them both with the stoniest stare.

It came as a shock to fans when Josh cozied up to Kaz in Casa Amor, but it also came as a surprise to the man himself, who later revealed at the recoupling ceremony that he did not expect his head to be turned. He told Caroline Flack that if his head did turn, “it would have to be someone sensational, someone who blew me away and Kaz came in and did that”, prompting a shocked reaction from the host.

Like Georgia the year before her, Amber stayed loyal to her partner Michael while he got to know new girl Joanna Chimonides at Casa Amor. His shocking decision to recouple was met by Amber re-entering the villa, shaking her head and laughing in disbelief in an iconic moment.

Her infamous slight against Joanna prompted Michael to brand her as “childish”, which birthed the “Destiny’s Chaldish” meme that has resurfaced every year since. However, the result only boosted Amber’s popularity which saw her go on to win that year alongside bombshell Greg O’Shea, while Michael has been branded as one of the worst Love Island contestants of all time.

Just like in the case of Millie and Liam (season 7), it came as a shock to viewers when Jacques decided to stick with Paige after leading Cheyanne Kerr to believe she was getting picked. Some even theorize that this was his intention before the negative fallout from Dami and Andrew’s recouplings made him change his mind at the last minute.

Despite confidently saying he will deal with the consequences of his actions, those consequences became too much for him when he realized his wrongs. After an explosive altercation with returning bombshell Adam Collard (who expressed an interest in Paige), Jacques made the shock decision to walk from the contest.

He Stuck, She Twisted

Faye had trouble letting her guard down during her time on Love Island. Even in the early days of her relationship with Teddy (who she is still with today), his affections seemed too good to be true. This appeared to be the case when the girls received a postcard hinting at their partners’ antics in Casa Amor, and although Teddy remained loyal, she was convinced otherwise.

Certain that Teddy would return with a new girl, she decided to twist in an act of self-protection, self-preservation and ultimately, self-sabotage. To her shock, he returned alone with the soft toy she had packed in his suitcase, which he placed on the floor in one of Season 7’s most heartbreaking moments.

The couple were one of the strongest in the villa before model Tasha Ghouri left for Casa Amor, but then the boys and new girls made Andrew doubt her feelings for him. His behaviour in his partner’s absence was shocking in itself as he ‘moved mad’ out of anger, while Tasha respectfully got to know new boy Billy.

It came as no surprise when Tasha chose to twist, but it was Andrew’s reaction to this that shocked viewers despite his own decision to recouple with Coco Lodge. He was filmed by the fire pit, stressing to himself, and even claimed that Tasha “tells more lies that Pinocchio.” His shocking method of self-protection just ended up hurting two girls in the process, with Coco feeling as though she had been used.

Fans and fellow islanders were shocked when Curtis made his move on Jourdan Riane during Casa Amor while Amy pined for him and planned to tell him that she loved him. Up until then, they had appeared to be one of the strongest couples in the villa, but in hindsight, Amy realized that his affections were not genuine.

After being rejected by Jourdan, Curtis decided to stick with Amy but was brutally honest about his feelings during his shocking recoupling speech that convinced everyone that he was about to twist. It was painful to see Amy so happy when she returned to the villa and heartbreaking to watch the events unfold following the result, which surmounted in her walking from the competition.

The only thing more shocking than Liam’s behaviour in Casa Amor, is the fact that he decided to stick with Millie after leading on new girl Lillie Haynes. Everything seemed fine for the reunited couple before host Laura Whitmore brought out Lillie to say her piece.

It took a lot of work, but the couple reconciled and went on to bag the £50K. Liam’s redemption arc arguably set a bad example for future contestants, with a similar situation having recently played out with Jacques and Paige. The couple recently announced their shock split, with fans theorizing that the new season might have opened old wounds.

The Game Awards To Reveal New Information On The Lord Of...

New World: Know The Actual Size Of The Game Map