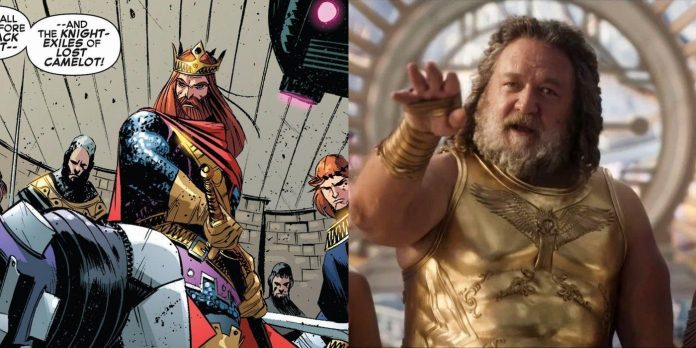 Caution: SPOILERS Ahead For Love And Thunder!

Thor: Love and Thunder continues the Marvel Cinematic Universe’s trend of exploring mythology and religion, a theme that has only become more prominent in Phase 4. The film follows the mythological god to Omniscience City, a meeting place for gods of various pantheons, introducing audiences to all kinds of different cultures.

The MCU has made it clear that it intends to explore the mythological gods of multiple cultures in the near future. Many such pantheons already have characters present in Marvel Comics and would therefore make perfect additions to the ever-expanding live-action franchise.

The British mythological pantheon is different from most others in that it does not involve a litany of gods and goddesses, but rather various heroes of legend. The most prominent of these characters is the legendary King Arthur of Camelot, who has made numerous appearances as a hero throughout the history of Marvel Comics.

King Arthur has important ties to several prominent Marvel heroes, including Captain Britain and the Black Knight, who already debuted in the mythologically-based MCU film Eternals. With the rise in Britain-based heroes in the MCU and the deepening of mythological lore in the franchise, King Arthur and his knights will inevitably appear at some point in the near future.

The lore of ancient Chinese traditions is fascinating and complex, as it includes influences from Buddhist and Taoist practices as well as common legends passed on through oral tradition. Marvel Comics dipped its toe in the waters of Chinese mythology with the introduction of the Xian, the inhabitants of the mythic realm known as Ta Lo.

The Marvel Cinematic Universe has already set up its connection to this lore through its recent film, Shang-Chi and the Legend of the Ten Rings, which included Ta Lo itself as a major part of the story. As one of the best new heroes introduced in Phase 4, Shang-Chi could effortlessly lead fans into a greater exploration of Chinese myths, perhaps in the highly-anticipated sequel to his debut film.

The indigenous Inuit peoples of Alaska and Canada had their own sets of mythological gods and heroes. One such hero was adapted for Marvel Comics in the early 1980s in the form of a character known as Talisman, though she would eventually go through a rebranding as Snowbird.

Snowbird is a prominent heroin from several major Marvel storylines and a recognizable face to fans of the comics. Not only could her introduction lend some representation to the indigenous peoples of North America, but it could also set up the arrival of yet another superhero team in the MCU, Alpha Flight, which the character is a frequent member of in the comics.

The Hindu pantheon proves to be one of the longest-lasting and richest of all the ancient religions, continuing to support over one billion followers to this day. Their many deities and heroes have been found in Marvel Comics’ own superteam, the Daevas.

With the MCU continuing its exploration of various religious beliefs and its commitment to increased representation, it may be the perfect time to introduce the Daevas into the franchise. The group would no doubt be involved in the workings of Omniscience City and may even be aware of Thor, Hercules, and the other gods already at work in the MCU.

The Marvel Cinematic Universe’s Moon Knight introduced several Egyptian gods to the franchise, most notably Marc Spector’s patron deity Khonshu and the hippo goddess Tawaret. These two mythological entities were joined by brief cameos from several other Egyptian gods, including Horus, Hathor, and several others.

While Moon Knight gets off to a good start in including the various Egyptian deities, there is still far more culture and mythology to explore regarding the ancient religion. While a second season of the Disney+ series remains unannounced, the creators behind the show would do well to plan for a larger representation of the Egyptian pantheon.

Japanese mythology has been a frequent and intriguing focus of many modern pop culture explorations, with Marvel Comics even trying its hand at such stories on several occasions throughout its history. The comics company has adapted several major deities from Japenese folklore, including Amatsu-Mikaboshi, the god of evil and chaos.

The Marvel Cinematic Universe could truly benefit from introducing elements of Japanese mythology. Not only is Japanese heritage sorely lacking in the franchise, but there are a number of intriguing tales that can be told featuring the ancient characters from Japanese folklore.

Aztec civilization, which originated in central Mexico, had its own body of myths and traditions, including gods and heroes whose names have been passed down to this day. Their fingerprints are found sporadically in Marvel Comics, with a handful of characters sharing names with the most prominent of the Aztec gods.

The famous Aztec god Quetzalcoatl is name-dropped by Thor during the events of Love and Thunder as a member of the council at Omniscience City, indicating that Marvel Studios could be planning to feature the character, who does appear in the comics, in a future project.

Love and Thunder likely surprised some viewers when it featured a cameo from the Kronan god Ninny of the Nonny at Omniscience City. This cameo, while hilarious, also raises countless questions regarding the religious practices of the Kronan culture.

The Kronan religion may not exactly include a real mythological pantheon, but the culture and deities of the beloved Korg’s people are certainly intriguing enough to warrant further exploration from the Marvel Cinematic Universe. Perhaps such a wish could finally come to fruition should Korg ever receive his own spinoff series.

Although Norse mythology has been a prominent element featured in the first four phases of the MCU, with Nordic gods like Thor, Odin, and Loki playing major roles therein, there are still plenty of aspects surrounding their history that have yet to be touched on, including some elements found in Marvel Comics that remain unexplored by the films.

Norse mythology has an abundance of stories and characters that could fit perfectly in the MCU should it continue to explore the Viking pantheon in future films. Characters like Thor’s brother Balder, who is a major character both in the comics and the myths, have rich and intriguing stories that would certainly serve to deepen the lore of the film franchise.

The religion of the ancient Greek civilization contains perhaps the most prominent set of myths and legends in the modern-day world. Its characters, such as Zeus, Hercules, and Athena, have all been explored in several different modern franchises, including Marvel Comics itself. Thereby, Love and Thunder indicates that the Marvel Cinematic Universe intends on doing the same.

The latest entry in the Thor franchise includes the introduction of Russell Crowe’s Zeus and, in a shocking mid-credits scene, the prince of power himself, Hercules, portrayed by Ted Lasso’s Brett Goldstein. The introduction of these two characters clearly hints at a future for the Greek pantheon in the MCU, with other mythological personalities like Poseidon, Hades, Ares, and more on their way to their next live-action adaptation.

Paranormal Activity Next of Kin Trailer Will Take Your Breath Away:...