Home Entertainment LOTR: Rings of Power – Will Halbrand be able to reunite the... 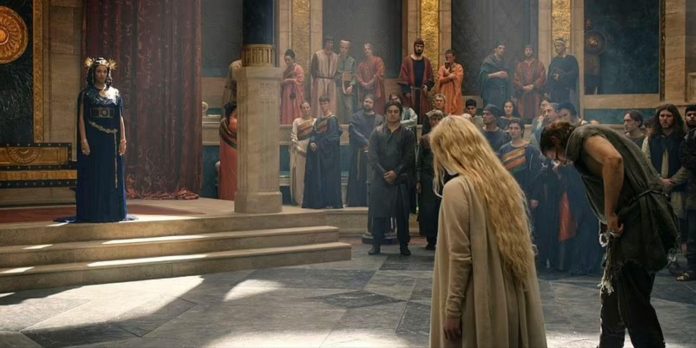 From the moment the audience first meets Halbrand in “Rings of Power“, a mystery appears in his character. The only clue to his hidden identity is the talisman he wears around his neck, which Galadriel doubts is the seal of the king of his people. With the release of the last episode, a clear path has opened up for Halbrand’s character, and he is very similar to the path of the beloved protagonist of the Lord of the Rings trilogy: Aragorn.

Both Halbrand and Aragorn have a vocation. Their goal is to claim their birthright as the great leaders of their people, correct the mistakes made by their ancestors in the past, and establish peace in their long-troubled lands. The question is, will Halbrand succeed in reuniting the peoples of Middle-earth, as Aragorn did thousands of years later?

This will certainly be an important theme of the show, as the third episode leaves viewers with the possibility that Halbrand and Galadriel will team up to confront the evil that they know is growing in the mortal world. After their unusual first meeting on the wreckage of a ship in the middle of a dark ocean, Galadriel is suspicious of this man, especially since he so readily abandoned his fellow sufferers to meet the terrible fate of the serpent in order to save himself. But after he jumps in to save her from drowning, he begins to gain her trust and respect. Galadriel clearly believes he is capable of more than he realizes, but is he capable of being great enough to challenge the darkest evil known in history?

Halbrand’s story is well known to fans of Peter Jackson’s film adaptations. In the original trilogy, it is shown that Aragorn is fleeing from his past and his duty as heir to Gondor. He is ashamed of his attitude towards Isildur and is afraid to repeat the mistakes of his ancestors. Subsequently, his people suffer as the lands remain without a king. While Aragorn struggles with his conflict, his people are ruled by inferior humans, including Denethor, a paranoid ruler who sits on the throne during the War of the Ring.

This clearly reflects some aspects of Halbrand’s situation in Rings of Power. Like Aragorn, his people are also oppressed and mistreated. In his situation, it is at the hands of the elves, who still treat them as traitors and enemies, despite the fact that their ancestors sided with Morgoth many centuries ago. When Galadriel finds Halbrand in the prisons of Numenor, already in trouble, she tries to remind him of this. She tries to lead him to his duty and encourages him to lead his people:

“Many years ago, a man who wore this mark united the disparate tribes of the Southern Lands under one banner. The very banner that could unite them today against the evil that seeks to seize their lands. Your lands, Halbrand. Your people don’t have a king, because you are him.”

But Halbrand is clearly running from the past, as is Aragorn. When Galadriel addresses him, he responds:

“Be careful, elf. The heir of this sign is not only the heir of the nobility. After all, it was his ancestor who swore to Morgoth on blood. I’m not the hero you’re looking for. Because it was my family that lost the war.”

In these words, there are many echoes of the fear that he would not be a good leader, which arose in Aragorn thousands of years later. Like Halbrand, Aragorn also believes that he is not the hero the people of Gondor are looking for, and that his bloodline will fail him: “The blood of Isildur flows in my veins.” However, the simple fact that Halbrand fears this shows that his heart is in the right place, that he is not proud and power-hungry. This gives those around him hope that he will really rise to become the ruler the world needs at that time, and will give a call to arms in which his scattered people must confront the common enemy Sauron.

Already saving Galadriel, Halbrand showed that he has compassion and courage, two traits that he will need to become a great leader. This bodes well for his journey in the rest of the series. On the other hand, he has also already made a not very decent choice, for example, he decided to steal the blacksmith’s brand, and not earn it honestly — this is what led him to prison in the first place. It remains to be seen whether he will actually have a strong enough heart, and whether he will have the courage and good intentions to be the salvation of his world. Hopefully, with Galadriel by his side to help shape him and guide him, Halberd will find the right path back to his destiny, just like Aragorn did many years later.