Home Entertainment LOTR: Rings of Power — how will Galadriel and Miriel turn from... 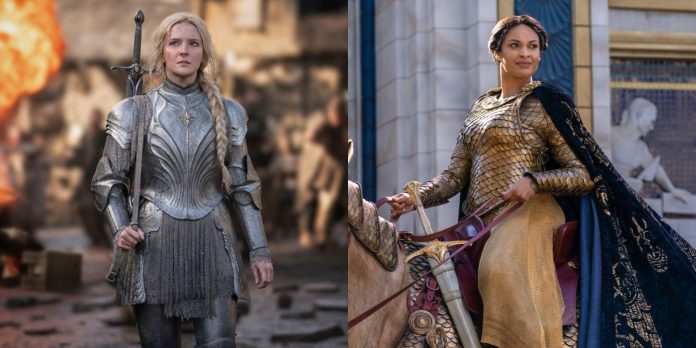 With the beginning of the third episode of the series “Rings of Power”, viewers got acquainted with some new and key characters for the upcoming story. One of the most significant additions is Tar Miriel, the Queen Regent of Numenor, who gives fans the first glimpse of the human world and begins to explain in detail why the people who were shipwrecked in episode 2 were treated so cruelly. Galadriel, as soon as they noticed her elf ears. With the momentary tension between Tar Mirirel and Galadriel, it becomes clear that there has been unrest between the two races for a long time, and many are curious to see how this power struggle will play out as the series progresses.

Moreover, in the early trailers of the “Ring of Power”, before the debut of the first few episodes of the series, there were clips in which Galadriel and Tar-Miriel worked in alliance with each other, even trusting each other so much that they looked into Palantir together to see how evil rises in the south. So, the question remains open: how do Tar Miriel and Galdriel move from insults and contempt for each other at the first meeting to the resumption of communication between elves and humans, which has long been forbidden in Numenor?

Oddly enough, the whole answer is related to Tar-Miriel’s cousin Farazon, who advises the Queen Regent during her meeting with Galadriel and Halbrand. According to Tolkien’s stories, Farazon has his own plans for greed, wealth and power, and he has a huge role to play in the events that led to the fall of Numenor. Therefore, Tar-Miriel must do everything possible to appear unshakable, loyal to the throne, a strong and stern leader, which her people and her cousin demand. Her position as Queen Regent is precarious, especially after her father was dethroned, so she must remain steadfast and not give people cause for suspicion.

But many believe that she is secretly already an ally of Galadriel and all the elves from the very beginning. As the episode progresses, it becomes clear that Tar-Miriel’s father was loyal to the elves, despite decades of hostility between the two races that began a long time ago. Elendil later confirms this to Galadriel: “For this we dethroned him. They say he spends his days in the tower now, an exile in his own city. And earlier in the episode, viewers could see Tar Miriel climbing to the top of a secluded tower, where she meets her father and tells him, “It’s here, Father. The moment we feared. The elf has arrived.

It is possible that Miriel and her father are aware of Sauron’s return and know that Galadriel will play a crucial role in his defeat. Therefore, Miriel is already secretly on her side, but acts as a regal, pompous queen, defending the long-standing values of her people against the elves, in front of everyone in the royal halls. She must play her cards carefully and figure out who she can trust before she makes her move to help Galadriel and her mission.

This may also be the reason she assigns Elendil to look after the elf while she is in town. She asks him about the meaning of his name, and when he explains the Eldar meaning behind it, she puts pressure on him: “You? An elf friend? Her tone is accusatory, she is clearly wary, but again this may be a trick. She tests him to find out his motives and intentions towards Galadriel before she ends up on the elf’s side. Miriel evaluates his reaction and says: “Elves have not been welcomed to our shores since the reign of my grandfather’s great-grandfather. You have decided to break with this precedent,” mentioning words such as treason and punishment, because she needs to know whether he will obey the authorities and the law or will defend and defend what he believes is right, regardless of the consequences.

Perhaps once he proves that he is indeed an elf friend and is willing to risk his life to help Galadriel reach Middle-earth and stop Sauron, Miriel will join them in their quest, following his father. the steps of an attempt to reunite the once strong alliance between elves and humans. So, in this sense, Tar-Miriel and Galadriel were never enemies in the first place (unknown even to the elf herself), it just had to seem that the Queen regent could best protect her and help her escape from Numenor unnoticed, but at the same time she kept the appearance of the ruler of the Numenor people.

Cult Of The Lamb: The best buildings of divine inspiration that...