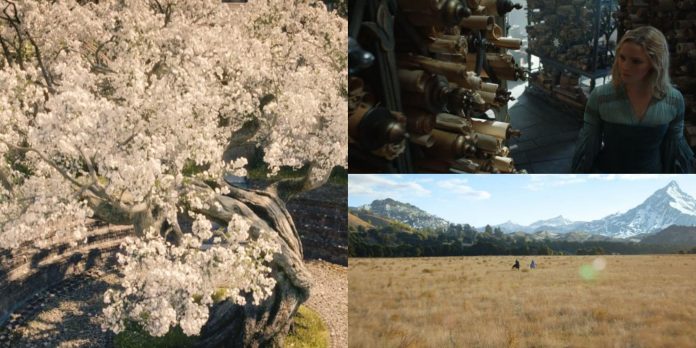 The epic story told in Amazon’s The Lord of the Rings: Rings of Power continues, and the ongoing saga of several royal families is now part of the storyline. Some of these family stories are part of Tolkien’s much longer and more detailed account of Middle-earth, and the authors of The Ring of Power have left in these last two episodes some interesting references that only readers of the books will recognize.

There are so many events happening in Numenor now that there is even more in Tolkien’s collection of myths and legends to impress the devoted readers who know the books and have kept their knowledge of the legends intact. Which Easter eggs from The Lord of the Rings in episodes 3 and 4 of The Rings of Power were noticed only by readers of novels?

Numenor was located in the middle of the ocean. Sail to the west, and the boat will go to the Immortal Lands, the home of the elves and the Valar. This is why the western part of the country is known for Elvish names and the use of the Quenya language, which is partly explained by Empress Regent Miriel in her conversation with Elendil in episode 3 “Rings of Power”.

Sail from the east to find Middle-earth, the home of several prominent elves such as Gil-galad and Elrond. The human region of Beleriand was formerly part of this eastern continent, but was destroyed during the War of Wrath.

At the beginning of episode 4, the orc kidnappers order Ardondir and his companions to cut down a tree lying in their path, and at first they refuse, based on some firm beliefs in the integrity of the trees. He addresses the tree, almost like a prayer or an apology, before viciously cutting it down.

Two characters in the films, Treebeard and Legolas, have lines about this custom, but only book readers understand that they are talking about an important part of elven culture. Arondir and his companions may be a mixture of different elves, but he is a forest elf born in the forests of Beleriand, and his people were the first to speak to the trees.

4 The Legacy of Elros

Books like The Silmarillion tell the story of Numenor in more detail, including how the kingdom was founded. Elros was the first king of Numenor, and for more than 400 years of his reign he laid the foundation of a huge empire.

The Valar not only gave this kingdom to their human allies, but also sent their angelic servants, the Maiar, to help them build some of the most stunning landmarks and other important details, such as a management system and a thriving economy. Manwe, the leader of the Maiar, helped build the royal palace of Elros, and until the Fall of aeons later, his eagles guarded the sacred peak of Mount Meneltarma.

There are many things in garfoots that are designed to remind the viewer of hobbits, but one interesting difference is that Harfoots lead a nomadic lifestyle, and hobbits are deeply attached to their permanent homes. Part of the history of the Second Age of Middle-Earth is how this change happened, and it began with migration.

One of the three original races of mortals who eventually evolved into Hobbits, the Harfoots were the first group to migrate west towards the kingdom of Arnor and the lands of Dunedain, who named them the Halflings. They teamed up with the Fallohides and built permanent villages, which eventually became Bree and Shire.

There are some references in the films to the ultimate fate of Numenor, but only readers of the books know the finer details. With the ancient legend of Atlantis as an obvious parallel, which is much more obvious in the books, readers know that the final fate of the island nation lies at the bottom of the ocean.

Miriel’s vision of an approaching tidal wave in episode 4 is frightening to say the least, but readers of the book know that there has never been a specific vision of destruction. The ban of the Valar has been in effect since the island was given to People, but no specific threats have been received in case of violation of the rules. Elendil understood that the people of Numenor were turning away from the Valar, but quietly gathered believers until the Emperor tried to break into Valinor.

1 Sauron and the Southern Lands

Fans of the Lord of the Rings films know that Sauron’s house in Mordor is located in the east of Middle-earth, and most of his human followers were recruited from the south. The Rings of Power seem to answer the same question as Faramir in the movies and books, as to what motivated the inhabitants of the south. Greed and anger or despair and fear?

How to remove the beta version of iOS 16 from your...

Michael Keaton in The Flash: “I always thought I could go...