Home Entertainment LOTR: Return to Moria – Who is Lord Gimli the Guardian 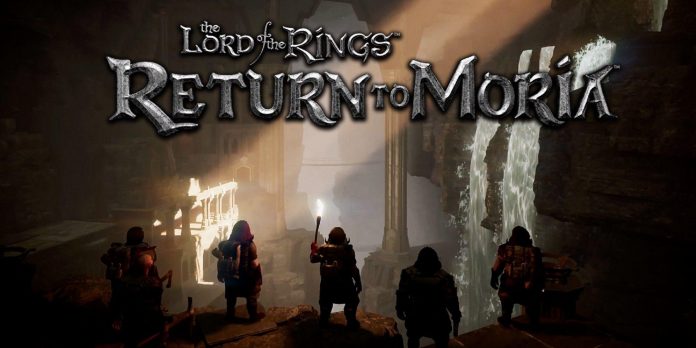 Few IPs capture the imagination of their fan base like Lord of the Rings does. The works of author J.R.R. Tolkien, and the world of Middle-Earth that he created, have found their way into multiple forms of media, from books and movies to comics and video games. Following a period of increased popularity in the early 2000s, coinciding with Peter Jackson’s highly acclaimed Lord of the Rings movie trilogy, the franchise saw an abundance of video games released throughout the decade. Not all of these games were necessarily good though, and most of them tried to stick pretty closely with the story and characters that had become so famous through the movies, rather than exploring new territory from within Tolkien’s massive world.

The Lord of the Rings: Return to Moria is looking to change that, though. Unveiled at the Summer Games Fest during the Epic Games Showcase, it will debut exclusively for PC via the Epic Games Store. Looking to games like Minecraft and Deep Rock Galactic for inspiration, it will feature procedurally generated areas in order to maximize replayability, all of which will be filled to the brim with artifacts from within Lord of the Rings’ deep and extended lore. The aim will be to build civilizations, handle threats, and venture as deep into Moria as possible, all under the watchful tutelage of Lord Gimli Lockbearer, a Dwarf and character that fans of Lord of the Rings will be all too familiar with.

RELATED: The Hobbit: Are Tauriel & Kili A Recreation Of Gimli & Galadriel?

Lord Gimli Has a Colorful Past

The game will see the Dwarves embark on a brand-new quest to reclaim their homeland of Moria, featuring a new story that will take gamers closer to the pint-sized race than ever before. These Dwarves will include none other than Lord Gimli Lockbearer, probably the most famous Dwarf to be associated with Lord of the Rings, thanks to his heroic exploits during the movie trilogy. Players can look forward to working together in order to restore the Dwarven homeland of Moria to its former glory. Gimli is a character that book readers will know far better than fans of the movies, as the fast pace of the trilogy meant that a lot of character detail given to him in the novels was left out of the big screen adaptions.

Son of the Dwarf Gloin, Lord Gimli Lockbearer is known as the only Dwarf to be a part of the Fellowship of the Ring, and he was already 139 years old when that journey began. His braveness and kind-hearted nature, which he buried beneath a hard exterior, impressed his party greatly throughout their perilous journey. Despite Dwarves and Elves disliking each other for a long period of time, he formed a close bond with the Elf Legolas, and their mutual respect which developed over time went some way to building bridges between the two races, due to Legolas’ high standing among the Elven community. Gimli fought shoulder to shoulder with Legolas against hordes of Sauron’s dark forces, and never once wilted. What he lacks in height, he makes up for in heart, and he is a fierce warrior whose expertise with an axe is truly a sight to behold.

Gimli obtained the name ‘Lockbearer’ in later years, following a successful request he made to the Elven ‘Lady of the Woods’ Galadriel, whom he had grown fond of. On his departure from Lothlorien, he had requested a strand of her hair to keep as an heirloom, and much to everyone’s surprise, Galadriel had given him three of her hairs. Gimli’s presence in Lothlorien had initially caused some tension between the Elves and the Fellowship, heightened after he had refused to succumb to the Elves’ request for him to wear a blindfold upon entry to the mythical woods, but he quickly warmed to Galadriel and the tension was soon dissipated.

What Happened to Lord Gimli After LOTR: Return of the King?

Following events in Peter Jackson’s 3rd and final film in the trilogy, The Return of the King, Gimli led a number of Dwarves south, in order to establish a new settlement in The Glittering Caves, located in close proximity to the infamous Helms Deep, where a great battle had taken place. He became the first Lord of The Glittering Caves, and in the following years, he and his people went to great lengths to repair some of the damage that the war with Sauron had inflicted on the surrounding areas. Most notably, the Dwarves were able to rebuild the city of Minas Tirith, which included the construction of a brand-new gate made from Mythril and steel.

In his later years, while it isn’t confirmed, Gimli was thought to have headed West with Legolas to visit the Undying Lands, something no Dwarf had ever done before. This timeline is likely to pose a problem for LOTR: Return to Moria, and the writers will have to get a little creative in order to sidestep potential issues, but there is no confirmation yet as to whether this new game will be canon or not.

LOTR is Experiencing a Resurgence

After a decade of relative quietness compared to the previous one, without a doubt, Lord of the Rings is experiencing somewhat of a resurgence. With a new TV show titled Lord of the Rings: Rings of Power set to debut early in September, and the upcoming game Lord of the Rings: Gollum due to release at the end of the year, J.R.R Tolkien’s world is alive and kicking. If LOTR: Return to Moria is able to stick the landing when it releases early next year, Lord Gimli Lockbearer and his Dwarven kin will be looking to regain their seat at the top table.

Lord of the Rings: Return to Moria releases in spring 2023 for PC on the Epic Games Store.

Destiny 2 In Data: The Reasons To Acquire Bungie