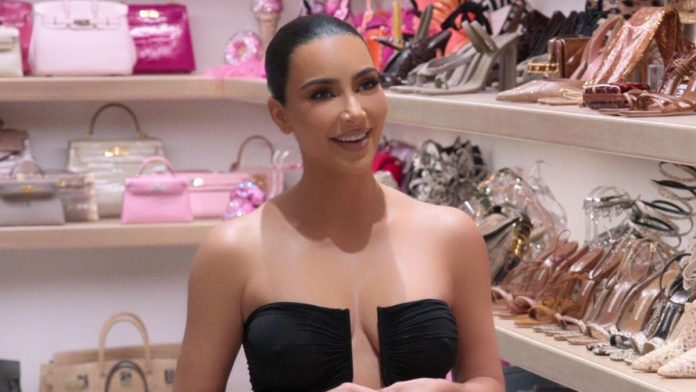 When Kim Kardashian wore the iconic Marilyn Monroe dress for John F. Kennedy’s 1962 birthday at the Met Gala earlier this year, it was not so surprising that it caused a real stir. On the one hand, there was some debate about whether anyone should be allowed to wear a branded dress at all, including rich reality TV stars. Kardashian also casually commented on the event about how she had to lose 16 pounds in less than three weeks to fit the part of the story that Riverdale’s Lili Reinhart later called an unhealthy and dangerous message. Three months after the clothing mess and weight loss controversy, the Hulu star is now showing how excited she is about her new (and lower) body fat percentage.

Although it’s not entirely clear whether this experience was related to the paid advertising of Bodyspec (and its mobile van for scanning body composition, which appeared at her house), but Kardashian seems to have sought to draw the attention of those who say she is “unwell.”. The TV presenter shared live the test results companies on her body, including her BMI, in Instagram stories. And, as you can see below, in just a year she managed to reduce her percentage in this most important category. from 25% to an incredible 18.8%.

In the clip, a technician can be heard telling the CEO of SKIMS that 18.8% is reserved for athletes — hence her festive signature at the bottom. In a subsequent video, she also stressed that she “has not lost muscle mass over the past year” as a result of weight loss. This means that she seemingly lost her overall weight in a completely healthy way, and not in extreme ways, as Kim Kardashian’s personal trainer claimed after the confusion with Marilyn Monroe’s dress.

Kim Kardashian didn’t stop there either. She also had her bone density measured. And the star had a huge reaction to being told she was in the upper 93-97 percentiles for strong bones—at least, she thought so. Check out a fragment of the post here:

I hate getting all the “well, actually” from a conscientious billionaire, but it actually looks like she was misinformed about the right percentile. The technician says in the clip that they are focused on the “Z-score”, which for Kim Kardashian was 1.3. The corresponding table shows that the value of 1.3 is somewhere in the wider percentile range from 69 to 93. Which, technically, is still very respectable, don’t get me wrong. We ‘re just keeping a close eye on it …

However, whether Kim Kardashian really has the body of a professional athlete (or just a good doctor) is still questionable. Just hours before the body-scanning van arrived, a mother of four documented in her stories her stomach-tightening-inducing “Morpheus laser” procedure. So, here’s what.

However, long before she demanded the athlete’s body, the 41-year-old woman imagined that she was following a plan similar to the protocol of the actress. After she was criticized for making statements about losing weight, Kardashian defended her position, saying that she always approaches the Met Gala as a movie role. We know that performers like Christian Bale are known for huge weight transformations on the screen, and even Ana de Armas looks completely unrecognizable in the role of Marilyn Monroe in the upcoming NC-17 biopic “Blonde”. However, in the case of Kardashian, it all comes down to whether her public persona is the part she plays on her own.

Her ex Ray Jay claimed that she and Kanye West were basically acting out lies in their new reality show The Kardashians. (He was mostly talking about the re-emerging sex tape storyline in the first season.) Presumably, we will learn more about what is real and what is not (as the notorious family sees it) when Season 2 returns on September 22 for Hulu subscribers. In the meantime, push aside LeBron James and others, because there’s a new BMI competitor in town…

The tragic ending of “Very Strange Cases 4” avoids the strangest...