Home News Lord of the Rings Online: The return of mmorpg 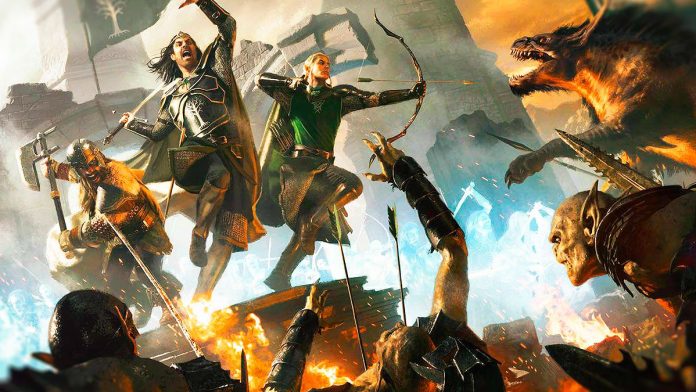 The history and trajectory of a video game that began to be forged 22 years ago.

In April, The Lord of the Rings Online turns fourteen years active. Almost a decade and a half offering original content related to J.R.R. Tolkien in mmorpg video game format. They may seem few compared to other colossi of the genre but these also have an extremely loyal niche of players, who continue to play it despite its ups and downs.

And it is that The Lord of the Rings Online has changed hands up to two times and now, with the purchase of Standing Stone Games by Daybreak, one more hand is added to add to the curriculum. Today we review the story of a sleeping giant who they plan to wake up in 2022.

April 24, 2007 was the day hundreds of thousands of players plunged into Middle-earth more real than ever. That day, The Lord of the Rings servers were open to the general public, although players who pre-ordered the game were able to enter a few days earlier. However, the history of the most complete video game based on Tolkien’s trilogy begins much earlier.

In 1998 the developer Sierra On-Line announced that they were working on an mmorpg genre video game called Middle-Earth. It was evidently set in the tales of the one ring, the Nazgul, Sauron, and other fantastic creatures known to many of you. Peter Jackson’s announcement of his desire to bring the Tolkien trilogy to the big screen only increased mass RPG fans’ curiosity about the development of Middle-Earth.

Vivendi Universal Games was at that time the owner of the rights to develop video games from Tolkien’s work but also, the owner of Sierra-Online. This guaranteed the Williams company to be able to carry out the video game without any problem, but the truth is that there were, and many.

The original development proposed that the player, when dying in the mmorpg, suffer permanent death. This caused many players to criticize the approach as it was not the usual norm. In addition, in 1999, Sierra had serious money problems and changed a large part of the development team to lower costs. Five years after its announcement, in 2001, the project passed into the hands of the Vivendi-Turbine association, but in 2003 it was Turbine that acquired the rights to create the video game.

The dance of companies, instabilities and strange playable decisions ended with Turbine’s acquisition of the rights, but throughout its history there have been more. On the one hand, Codemasters, which was the company that distributed the video game around the world and which also kept it in Europe in all its aspects, ceased its activity on The Lord of the Rings Online in 2011. This included the servers, which from that moment they turned off their lights in Europe to reopen in America and 100% controlled by Turbine, its creator.

In late 2016 Turbine sold its two flagship video games, Dungeons and Dragons Online and The Lord of the Rings Online, to a little-known company called Standing Stone Games. And how could an indie company buy both brands? Thanks to Daybreak Game Company, the company behind EverQuest I & II, DC Universe Online or Planetside 2 among others. Not surprisingly, the latter is the owner of Standing Stone Games.

The Lord of the Rings: Shadows of Angmar

The video game, as we said at the beginning of the article, reached homes in April 2007. After several alpha and beta phases of which they took very good notes, the developer announced an original offer for those who reserved the video game; If you paid 150 euros for the most expensive edition of The Lord of the Rings Online, it would come with a lifetime subscription. With this edition, the player would never have to pay the monthly subscription. But if you didn’t have that much money, there was a lower-cost pack that offered subscriptions for less than $ 9 a month. In my case, if you allow me this detour in the article, I got this latest version even knowing that I liked the game in both the alpha and beta phases. Even though this promotion lasted many months longer than expected, I never ended up buying the lifetime option, and it is something I will remember all my life. Silly that is one sometimes.

The Lord of the Rings Online: Shadows of Angmar proposed us a journey after the company of the ring. In other words, our journey was one step behind that of the heroes we all know on their journey to the territory of Sauron. Drawing on the Tolkien trilogy and all the related folklore, Turbine designed the game with the help – or rather, impositions – of Tolkien Enterprises and the writer’s family.

With these ingredients in the saucepan, she cooked a video game that fully respected the universe created by John Ronald Reuel Tolkien. For example, there is no magic class in the mmorpg since the only ones capable of casting spells are the Istari. Hobbits are very adept at the art of stealing, just like they are in the books, and PvP doesn’t exist as we know it, as free peoples that weren’t dominated by Sauron didn’t fight each other.

On our way to Carn Dûm to end the Witch-king of Angmar, players could visit places like Ered Luin, The Shire, Bree, the Trampling Pony’s inn, the Summit of the Winds, see the trolls turned to stone. in the adventures of The Hobbit or meet Tom Bombadil among many other well-known characters and places. The dream of every fan of Tolkien’s legendarium.

Another wise decision was to differentiate the main plot from the secondary one. To do this, they would use Tolkien’s literary format, that is, the base story is divided into volumes and chapters, while the secondary one appears simply in the mission log. In the end the differences are not so many but this differentiating element provides a plus of immersion that makes it unique. If we add to that that the main story has dungeons for one or several players and video sequences, we have a great combination.

The game, of course, no longer had permanent death among its programming, but it was equipped with a graphical interface that at that time was almost mandatory for new generation mmorpgs. Shortcuts in skill bars, all visual and without using commands, all the information integrated into the game screen…. Does it sound like something to you? Exactly, World of Warcraft changed the way mmorpgs were played practically from the day of its launch.

It also brought innovative game mechanics. For example, in The Lord of the Rings Online there are taxidermists in which you can exchange your trophies to turn them into figures with which to decorate your house. Yes, the mmorpg has a very complete housing system that is much loved by the community. From the landscaped areas to the music that plays inside the houses, the housing allows you to modify practically any element of your apartment.

Multiplayer dungeons, raid dungeons, epic battles, achievements, class missions, and everything a Tolkien fan wanted for a title of this kind. However, the monthly subscription, the poor animation of the models – and the models themselves of many characters – or the non-translation into Spanish made a good number of players abandon the title soon after.

That it was not translated into Spanish provoked the ire of a multitude of Spanish-speaking people because, as we continue to see today, they are faithful followers of Tolkien’s work. In fact, the Spanish Tolkien Society is considered one of the most important in the world. Moreover, as an extra contribution, if you enter the game on the Evernight or Laurelin servers, you will see Spanish players who have been there, day by day, since the alpha period of the game. Fourteen years traveling and sharing adventures with friends or children in the virtual world of Middle Earth.

A year and a half after hitting the market, the doors of Moria opened with the first expansion of The Lord of the Rings Online; Mines of Moria. After a short series of missions, the player was able to open the doors of the home of the dwarves and discover the greatness of Moria. There, new challenges and features awaited that are here to stay, such as the ability to create legendary weapons.

Although the duration of an expansion located entirely in a few mines was doubted, it was soon discovered that the once city built in the First Age was gigantic. Dark, perhaps too dark, the setting hides in its corners dreamy landscapes and remnants of dwarf civilization. And in between, some chinks of life in different settlements.

We had to wait for a new content update to leave Moria and visit what is perhaps one of the most beautiful settings that have passed through The Lord of the Rings Online; Lothlorien. There the player can meet Galadriel in person and interact with his mirror, one that reveals visions of the past, present and future but which may not be real.

In the video game’s trajectory through expansions to Isengard, there was still time for one more, Siege of the Mirkwood, a kind of epilogue to Mines of Moria where it was also announced that the mmorpg was opening to the F2P market without abandoning the subscription model. . Anyone could enjoy The Lord of the Rings Online without paying a monthly fee in exchange for certain restrictions that could be circumvented by completing in-game achievements.

This strategy caused uncertainty among players who paid a lifetime subscription, but Codemasters clarified that all the content and functionalities of the game, except for the expansions, would be unlocked for these accounts. To this day, this market strategy remains active so that any player can enjoy the video game for free.

Itaú promotes event to hire women in the IT sector