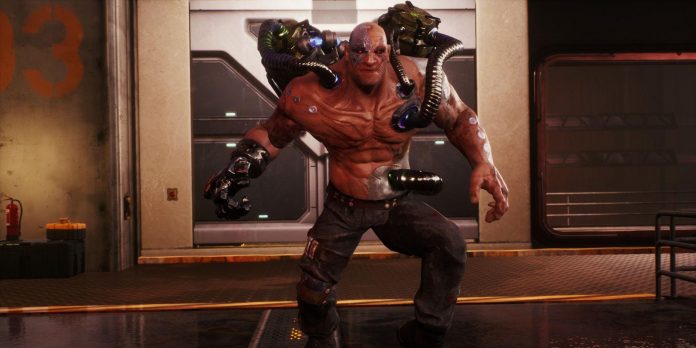 Loopmancer is a rogue—lite platformer in which players can defeat bosses like The Big Guy. This muscular boss, similar to Bane, is the first boss that players will encounter in Loopmancer while traveling around Longxi City. The big Guy towers over the main character, Xiang Zixu, and the boss seems to have ventilation hoses connecting from the power unit on his back directly to the musculature.

Loopmancer follows Xiang Zixiu, who tries to unravel the mystery of a young journalist’s death and his mortality as he begins the game dying before waking up to find himself trapped in a loop. The game takes place in a cyberpunk-style city in China, and throughout the journey Xiang Zixu comes into contact with the underworld of Dragon City and its numerous bosses. The Big Guy is the first one the players will face.

The big guy is in the garage right after the Sulfur Building. As soon as the players clear the Sulfur Building, they will meet Wei Long and launch a cut scene in which Zixiu will try to ask about the missing journalist. Wei Long will escape, but the players will have to fight the Big Guy. Although he looks cool, his movements are telegraphed, so players should be able to dodge his attacks, rush around him, and then attack.

How to Beat the Big Guy in Loopmancer

The first boss in Loopmancer, the Big Guy, has three main abilities. Before making one of these moves, it will flash red, so players should step back and prepare to dodge. Since the Big Guy is the first boss in the game, his movements are telegraphed in advance to teach players how to fight, so wait until he applies one of his three abilities before attacking:

Lightning Explosion — When the Big Guy flashes red with blue swirls of energy, he will make an attack that will cause damage to everything in front of him in the telegraphed area. Teleport Strike — If the players are too far away, the Big Guy can teleport to them and attack. He can do this twice in a row, and this ability will be triggered more often when the boss’s health drops. Overload — When the Big Guy flashes yellow, he is about to overload with force. He will crush the ground and create an AoE shockwave around him, and the only way to dodge in time is to make a dash back.

Fortunately, with most of the Big Guy’s attacks and abilities, players can simply dodge to the side, wait until he finishes the attack and becomes vulnerable, and rush into the attack from behind. After killing him, he would praise Zixiu’s fight. In addition, players will receive a souvenir before rushing to hunt for Wei Long.

Ryan Gosling debuts Shirtless (and with bleaching blonde!) in the role...