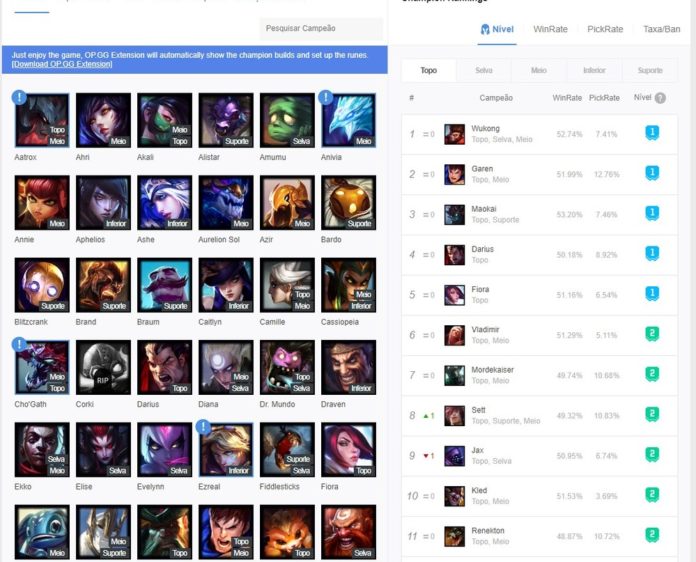 League of Legends (LoL) is a highly successful MOBA, with free download available for PC. The Riot Games game has several important statistics, from the amount of victories a champion has, to the percentage of success that a build or rune has on each character. On the website (https://br.op.gg), the player can track various data, such as tier lists, ranking of players and champions, runes, items and much more. In the past, it was even possible to consult the player’s MMR, but the developer hid that number. Check below how to use the website to view these statistics.

Player statistics
Step 1. To search for statistics for a specific player is very simple, just type the user’s summoner name in the search bar;

Step 3. Below is the match history. For more information about a specific game, click on the arrow on the right side of it to see more options, both about players, total gold, kills, objectives, damage, sentries, farm and items. A more in-depth analysis of the game can be found in the “Team Analysis” tab, including comparisons between teams on kills, gold, deaths, damage done, damage received and sentries placed.

Tier List
Step 1. In the upper tab of the page there is the option “Analysis of Champions”, where the player can find analyzes about each champion of the game. On the right side, there is a list of the strongest champions with the highest success rate. The player can check the data among the best in each position and change the order to priority of choice or higher rate of wins. The data is a compilation of information taken from the games above the platinum;

Step 2. Another way to check a champion’s priority is in the “Statistics” tab at the top of the page. In it, a general graph of the champions with the highest winning rate appears. The player can choose more criteria for the analysis, such as statistics for a specific league, ranked or regular games, choice / ban rate and information about a specific time period. The ranking also shows the champion’s average KDA, CS and gold;

Step 3. For a more in-depth analysis of a specific champion, just click on its icon and a new page will open. In this, the player finds statistics about the champion on that route, such as win and loss rates against specific characters, builds, spells, order of skills and recommended runes. All are based on a rate of higher usage and win rates.

Ranking
Step 1. For information focused on the ranking of players, just click on “Ratings” at the top of the page. There, the players with the highest ranking on the server will appear, which has many professional players.

All the data that was listed in this tutorial can also be consulted by other players. It’s a good idea to keep an eye on how the best of the server are playing to improve their gameplay.