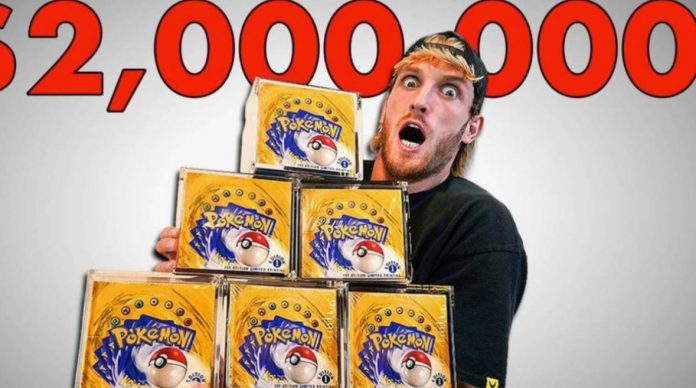 Logan Paul has made news after revealing on his YouTube channel that he has spent a ‘poke fortune’ on cards from the first edition of Pokémon after only a few months.

The 25-year-old youtuber Logan Paul revealed that after a series of unboxings of cards from the first edition of the Pokémon card game, he has managed to gather the largest collection of the original set, which has not been cheap since he has invested up to now 2 million dollars in his collection.

The first box of valuable Pokémon cards that the youtuber acquired was priced at $ 350,000 and contained only 400 cards. Later, Logan Paul bought three more boxes from different vendors for 325,000 each.

Then the ‘biggest transaction in the life of Logan Paul’ took place, as the youtuber paid 675 thousand dollars for two boxes of the first edition of the Pokémon card game, reaching a total invested of 2 million in just a few months.

But the youtuber could not stop there since on February 27, Logan Paul will undoubtedly be watching the ‘largest Pokémon card unboxing’ with individual packs of cards from the first edition that will be auctioned with an initial offer of $ 10,000 .

It should be remembered that the famous and controversial youtuber also spent 150 thousand dollars for one of the rarest Pokémon cards of the first edition: the Charizard card of which there are only 100 units with a PSA rating of 10.

And it is that the passion of youtuber Logan Paul is already known among collectors, who have given preference to the famous after seeing the ardor with which he has assembled a quite impressive collection of cards from the first edition of Pokémon.

This is how youtuber Logan Paul has already invested 2 million dollars in Pokémon cards without giving any signs that it will stop in the future, so without a doubt his impressive and valuable collection will continue to grow, so in Somagnews we will continue closely the acquisitions I make to bring you the latest.