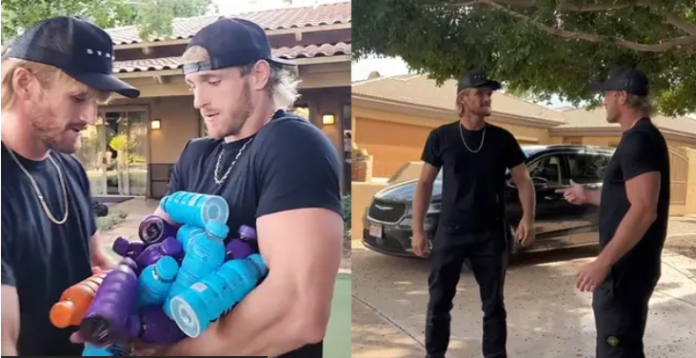 The viral lookalike of Logan Paul from TikTok, Rodney Peterson, received a special delivery of PRIME Hydration, which the popular YouTuber himself delivered personally at their first meeting.

Back in August 2022, the man many thought was Logan Paul started spreading on TikTok.

He was quickly identified as Rodney Peterson, and his TikTok account quickly grew to over 160,000 subscribers and continues to grow. In fact, it has become so viral that even Jake Paul commented on one of his videos.

The viral doppelganger was finally able to meet Logan Paul on October 31, and he brought with him a special supply of PRIME Hydration.

In the TikTok video, Rodney responded to a comment asking if he had recently received a help package from PRIME Hydration.

While Rodney was wearing a black hat, shirt, trousers and white shoes with a gold chain, a few seconds later Logan Paul appeared with his hands full of PRIME.

To top it all off, Logan appeared in an identical outfit to further enhance the look of the doppelganger.

Replying to @the.new.era.1 #staypositive #keepgrinding Yep, I Wanna Give A Huge Shout Out To All of You for the Amazing Support which made all of this possible. #thankyou @loganpaul #smile #maverick #rodneypetersen also known as #notloganpaul

Logan also uploaded the video to his own TikTok channel with the caption “it was weird” under the video.

After the first meeting with Rodney, they also reported that they were even the same height when posing for a photo.

THIS WAS WEIRD 👀 @Not Logan Paul

Shortly after the two videos were uploaded, fans flooded the comments with their thoughts on how they finally met.

“Imagine that your double is a celebrity,” one user commented.

Another viewer said: “HE FINALLY MET LOGAN, I’m happy that he pursued it with his appearance, look where it got him.”

Others even compared him to PewDiePie: “He looks like PewDiePie and Logan Paul.”