Home Entertainment Location of each drama theater in Genshin Impact 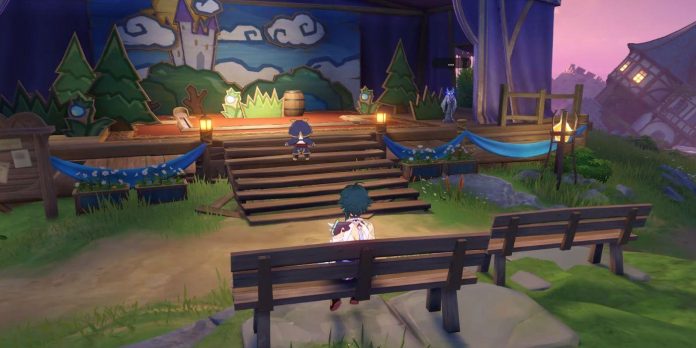 After completing the “Immernachtreich Apocalypse”, Fischl’s Summertime Odyssey quest from Genshin Impact, the traveler will get access to the local task “Drama-Phantasmagoria: The Tale of the Swordsman Princess!”, during which the player must find three drama theaters. places. This local quest begins in a castle in the center of the Twin Island, a large island formation on the northeastern side of the Golden Apple Archipelago. Here, Paymon and the Traveler will meet with the head of the Twilight Theater, an NPC with a statue of a Raven, who wants to offer a free performance of the grand play of the Twilight Theater.

To pass the “Drama Phantasmagoria: The Tale of a Princess wielding a Sword!”, the Traveler must first go to the bulletin board at the entrance to the territory of the Twilight Theater. After watching the first half of the performance, the player will be tasked with finding the right composition of the Raven Statues to place on stage. Tips on the correct location of the cast can be obtained from the director of the Twilight Theater. Of course, none of the figurines is mechanically movable, instead it will guide the player through the plot with the help of sounds.

After completing the local task “Prelude of the Golden Apple Archipelago” in Genshin Impact, the Traveler must go to three places where the play “Twilight Theater” was staged, and help the theater director “Complete the interlude” three times. Unfortunately, many fans may find the lack of activity during this quest quite tedious. However, the whole experience is voiced and offers a charming screenshot of the photo album as a reward for completing the Final Act.

Search for each drama theater in Genshin Impact

The first location of the drama theater of the task “To complete the interlude” in Genshin Impact near the southern beach of the big southeastern island. In particular, the Twilight Theater will be located directly south of the lower left tower of the nearby castle. If players check the map, they will be able to notice a purple rectangle sticking out from under the elevated ridge to the south.

The second location of the drama theater is located on the northern main island in Genshin Impact, where the local task originally began. Look for the theater along the southeast trail between the castle and the south ridge. Finally, Travelers can find the location of the third Twilight Theater on the westernmost island of Twinning Isle. Look at the map to see a large purple rectangle located at the base of the north side of the central peak of a small island.