Home Entertainment Liverpool Takes 6th Place in The Premier League Before The Break For... 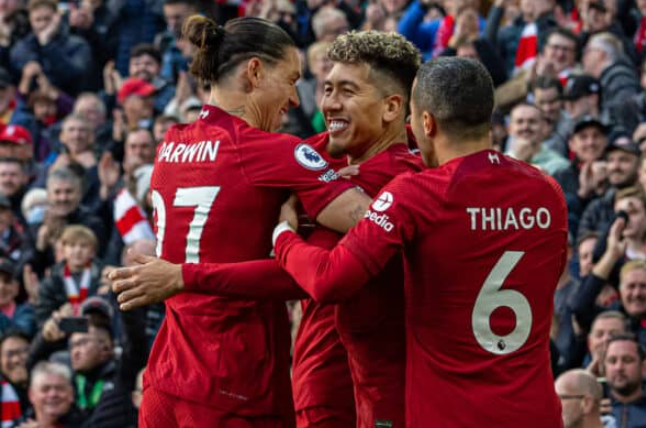 Brighton’s defeat by Aston Villa on Sunday means Liverpool go into the World Cup break sixth in the table, and their next Premier League clash won’t take place until Boxing Day.

Two consecutive wins over Tottenham and Southampton have at least given Liverpool some hope of salvaging their league campaign, as they have so far failed to reach the high standards they have set in recent years.

Jurgen Klopp’s side have won only six of their first 14 Premier League matches, with four draws and four defeats.

However, they are approaching the mid-season break with great success, having won eight of their last 10 matches in all competitions.

On Saturday, a 3-1 home win over Southampton saw them overtake Chelsea and Brighton to take sixth place in the table, and there they will remain until Christmas, while Brighton beat Aston Villa 2-1 at home on Sunday.

Being ahead of Chelsea in the table is little consolation for Klopp’s team, given the criticism they have received for their performances for most of this season.

This is certainly not the position Liverpool hoped to be in at this stage, but with seven points separating them and fourth-placed Tottenham having played a game more, the Reds are at least within touching distance of the top four.

Any hopes of fighting for the title are almost over: the Reds are 15 points behind Arsenal, who will be the leader of the table at Christmas.

Man City are 10 points ahead and in second place, but many might have expected that gap to be bigger at this stage, given the contrasting form of the two teams for most of this season.

The start dates and times are still being clarified*

This is Pep Guardiola’s team that Liverpool will face in their next competitive match, and the fourth round match of the League Cup is scheduled for Thursday, December 22, at the Etihad Stadium.

Their next league meeting will be at Villa on Boxing Day, before they host Leicester at Anfield on December 30, and conclude their festive schedule with a trip to Brentford on January 2.

Before that, those who will not participate in Qatar must take part in a mid-season training camp in Dubai, and Liverpool are expected to play friendly matches with clubs such as Milan and Lyon.

TemTem: How To Make Money