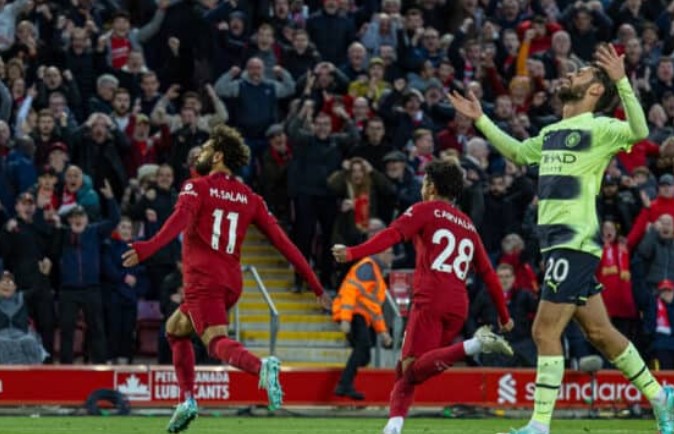 Regardless of the form of both sides, the excitement in the match led to a fierce start at Anfield when Harvey Elliott securely blocked Nathan Ake, setting the tone for the fans.

Both Liverpool and City sought to evaluate each other from the very beginning, and when Thiago flaunted Kevin De Bruyne to block a feed to Erling Haaland, Ilkay Gundogan and Diogo Hota were the first to check the two goalkeepers.

A brilliant, long period of possession led to the moment when Virgil van Dijk gave a pass to Elliott, but the ball landed completely to the wrong player when Andy Robertson shot high and wide.

The next big chance fell to Elliott, who enjoyed a brilliant first half, but when Salah challenged the teenager to go one-on-one with Ake, he rejected it, trying to hit his stronger leg.

Before the break, Haaland had time for one real opening, which happened for the first time when De Bruyne was given space, but fortunately Alisson was there to deflect the striker’s powerful header.

The second half began with a huge chance for Salah, who raced forward after a combination play by Elliott and Roberto Firmino, but Ederson beat it off with his fingertips.

City then got the ball in the back of the net through Phil Foden, but referee Anthony Taylor ruled it out after a VAR check and Haaland fouled Fabinho in the build-up.

This brought Anfield back to life, and Liverpool almost immediately took the lead, but Hota made a mistake with his head after Salah’s fine cross, deflecting it from close range.

As the pendulum swung, Jurgen Klopp turned to his bench for a triple substitution when Jordan Henderson, Fabio Carvalho and Darwin Nunez came out.

Then came Salah’s sensational goal, knocking down Alisson’s long pass with a stunning turn and beating Ederson with an accurate finish.

There was a late red card for Klopp for protesting one of the many blatant fouls that Taylor overlooked, but with or without a manager, Liverpool were able to hold on to a priceless victory.