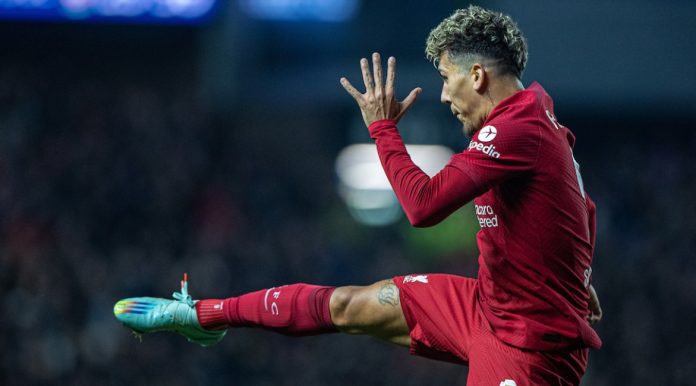 Roberto Firmino was Liverpool’s hero at Rangers, scoring two goals and making an assist that led the Reds to a crushing victory, which was necessary.

For the eighth time in 12 matches this season, Liverpool conceded first — it’s more surprising when they don’t do it these days.

Thus, the task for Liverpool was not a surprise, since a comeback was required, and there was one person who led the attack, Firmino.

The Brazilian was Liverpool’s best player this season, scoring six goals and providing three assists before the trip to Scotland.

He left Ibrox with eight goals and four assists, which played a key role in Liverpool’s 7-1 victory, bringing Jurgen Klopp’s team within one point of the last 16.

After 73 minutes on the field, he turned out to be a class above others, the fans praised No. 9:

Of all the players I expected to have a revival this season Firmino would be the last of my list. What a player. pic.twitter.com/InN2fQCefB

Roberto Firmino has more goals for #LFC than Kevin Keegan, and two more draws him level with John Barnes.

12 more and he goes level with the great Ian St John.

Roberto Firmino, love him. Shown class where others have been lacking. The man in form.

If it wasn't clear, love him. 🥋 pic.twitter.com/BS9mSa8u0D

Sassuolo vs. Inter, for Serie A: training, day, schedule and how...