Kaoimhin Kelleher was the star of Liverpool’s penalty shootout win over Derby, but Calvin Ramsay also caught the eye at Anfield.

The Reds hosted the first League team in the third round of the League Cup on Wednesday evening, and Jurgen Klopp made 11 substitutions on this occasion.

After an unforgettable 90 minutes, penalties were required, and Liverpool eventually won 3-2.

Harvey Elliot scored the decisive penalty, and Kelleher made three vital saves, and Klopp’s wards made it to the 1/8 finals. 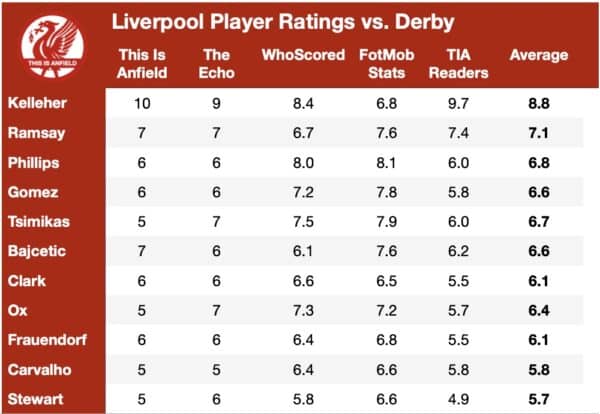 It was Kelleher (8,8) who easily earned the highest average score, once again proving that he is an expert in deflecting penalties.

The Irishman also impressed with his versatile game, he is really an excellent understudy for Alisson – he would be the first choice at most other clubs.

Jack Lasby of TIA simply said “what a goalkeeper” when assessing Kelleher’s influence, and his legend at Anfield has grown in just his 18th match.

Meanwhile, Ian Doyle of Echo praised the “three great stops” that prevented the Derby players from taking the shootout, as he ended up being the winner of the match.

Ramsey (7,1) was in second place, as the Scot showed what a promising player he is, with the help of a lively and powerful game from the right-back.

According to Lasby, the 19-year-old was “able to handle the physical challenge and demonstrate ingenuity in the future,” while FotMob noted that he had an impressive 95 percent pass completion rate.

Next in the rankings was Nat Phillips (6.8), who was a confident player in the center of defense, and Doyle called him “diligent.”

In terms of the worst performer of the night, Leighton Stewart (5.7) received the lowest average score.

However, it was a proud evening for the young striker, who fulfilled a childhood dream and made his debut for Liverpool.

The next one for the Reds is Saturday’s Premier League match with Southampton at Anfield (15:00 UK time), the final game before the six-week break in the World Cup.

Legends of Tomorrow: Captain Cold To Participate In The 100th Episode...