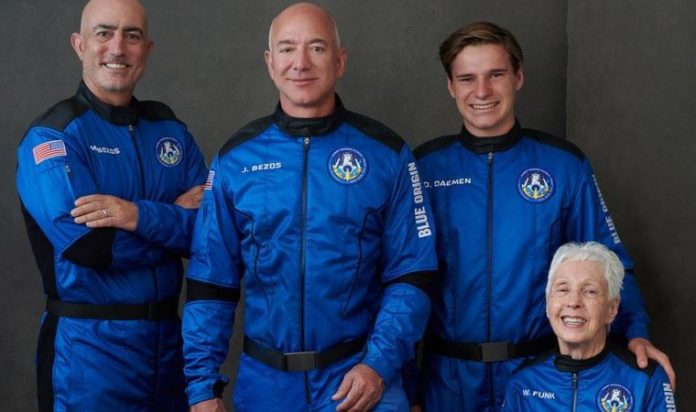 Live – Follow Jeff Bezos Take Off Aboard A Blue Origin Rocket. The founder of Amazon and Blue Origin takes a seat alongside three other passengers on a suborbital flight. Take-off is scheduled for 3 p.m. French time.

Bezos and his companions leave from the Corn Ranch, a site in the US state of Texas close to the equator. They will experience three minutes of weightlessness at the edge of space, before returning to the launch site. After only 10 minutes, the space tourists should be back on Earth.

The New Shepard travels without a pilot. Mark Bezos, the younger brother, 81-year-old former flight instructor Wally Funk and 18-year-old multi-millionaire son from the Netherlands, Oliver Daemen, accompany Bezos on his journey. In this way, Bezos brings both the oldest and the youngest person into space in one fell swoop. Richard Branson claimed the title of first space tourist earlier this month.

En route to the launch pad in a Tesla competitor

The crew made their way to the launch pad in a 100% electric SUV from the Rivian brand. A new American manufacturer which aims to compete with a certain Tesla, the brand of Elon Musk.