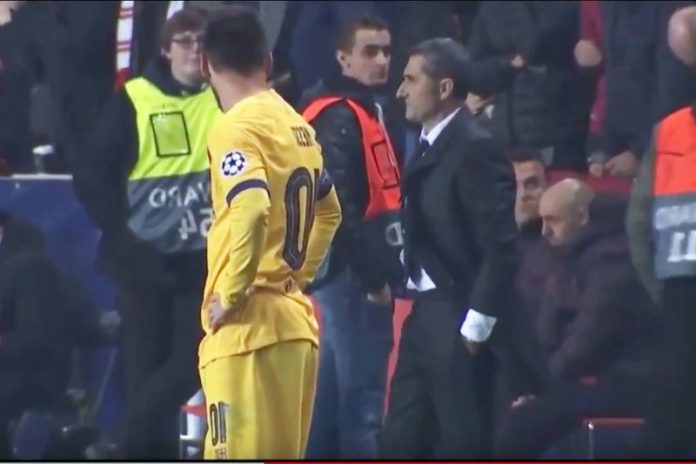 Barcelona beat Slavia from Prague by 2 to 1 in their last Champions League match, but that victory in the capital of the Czech Republic did not bring good conclusions. Moreover, goalkeeper Ter Stegen himself later admitted that there was a “talk about some things” inside the locker room, in order to improve performance.

The balance was negative, especially since the Catalan team almost ended up asking for the time against a very weak opponent, who surely will not go far in the top European club tournament. Although Lionel Messi marked almost at the start of the game, that sense of superiority was gradually diluted, to offer a poor collective image. The 2-1 was more than adjusted.

After a few days, some moments of this meeting were rescued that give the pattern of the prevailing fragility and the occasional laughter within the group. One of the triggers of this rare situation came with the equalizer of the Czechs. Spanish television captured the moment when Messi is taught downcast while Slavia players celebrate the goal of the draw, converted by Jan Boril at 5 minutes of the second half. Then, the Flea turned and stared at Ernesto Valverde for almost a minute.

The angle of the camera does not allow to assure if the look of the rosarino pointed directly at the technician or if it covered the entire bank of substitutes, but the truth is that Messi stared as if looking for explanations outside the court, a request for help in front to the feeling of helplessness that the team showed in those passages of the match, suffering again and again in its own arc.

After three dates in Group F, Barcelona appears as a pointer with 7 points (2 wins and one draw); Inter leads by 3 units and on November 5 will face the Czechs again, but in local condition. The numbers give tranquility to the Valverde team, which is even leading in the League, but the actions indicate that there is a long way to improve the level.