Home Celebrity Lindsay Lohan Is Working with an acting coach for Her Netflix Christmas... 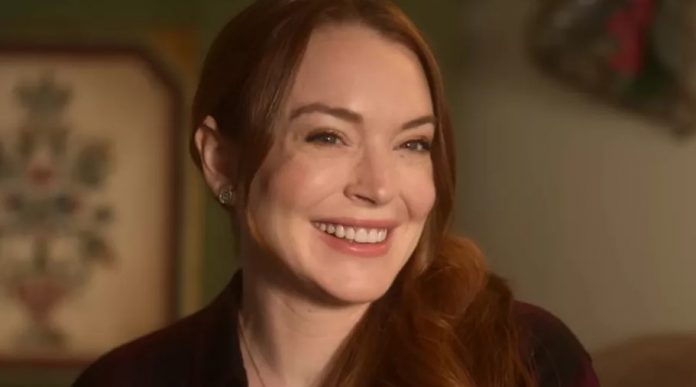 The children of the early 2000s, like me, probably grew up on Lindsay Lohan’s filmography. From “Parent Trap” to “Mean Girls” and “Freaky Friday” — these have been formative films for me and, I’m sure, for many other millennials and old Generation Z, and the common denominator for them is Lohan. Now she’s returning to acting, teaming up with Netflix to create a holiday romantic comedy. After several years of absence from the business, she talks about getting back into the rhythm of acting and hiring an acting coach for the first time.

Lohan will play the main role in the movie “Falling in Love with Christmas“, which will be released near the end of the schedule of upcoming films, just in time for the holiday season. She’s starring in the movie with Glee graduate Cord Overstreet, and from the trailer it seems like we’re getting an actress we know and love back on our screens. In a recent interview with THR, she talked about meeting Bernard Hiller and said that they immediately found a common language, and she hired him as her acting coach. The actress explained her relationship with him by saying:

“I have never worked with any acting coach in my life! In fact, I don’t see Bernard as just a coach. He’s more of a skills advisor and mentor. aspects of character in life.

In an interview, the star of “Mean Girls” noted that she is “second” in her hairstyle and makeup, she is in the image. However, although she is immersed in the scene, she never gets stuck in it as soon as the director shouts “cut.” In the interview, she discussed other acting techniques and what she learned from Hiller, noting that he “changed [her] life.”

At first glance at the Christmas movie, Lohan seems to be in a festive mood and having a lot of fun. Judging by the trailer and photos released by Netflix on “Mean Girls” Day (October 3 for those who don’t know), the “Parent Trap” actress looks like she’s really putting these lessons into practice. The film looks silly and heartfelt, and it looks like the actress has completely devoted herself to this role. Personally, I can’t wait to see her in action again, and the way she did all the work makes me even more excited.

It looks like this isn’t the last time we’ll see Lohan. She has another romantic comedy linked to Netflix called Irish Wish, which has the same director as Falling for Christmas. I like that this icon of the early 00s is back in business. Studying all the behind-the-scenes work shows how much she works to improve and enjoy the process. To see Lohan on screen again, you can watch Falling for Christmas on November 10 with a Netflix subscription.

Kylie Jenner, Markle Meghan, Cardi B … Who are the most...