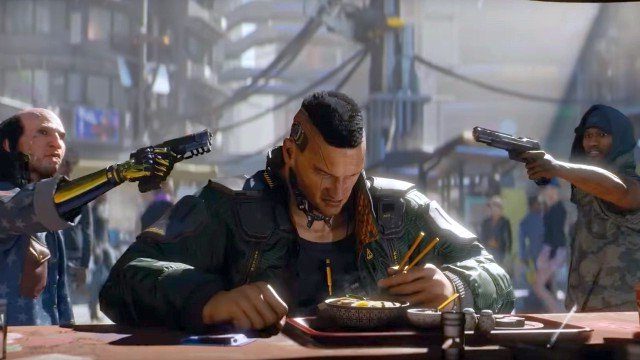 The developers of “Cyberpunk 2077”, which are expected to be released in September, also actively use social media. The Cyberpunk 2077 social media team, which recently raised a question to the video card giant Nvidia, welcomed the gamers with great news.

Nvidia, one of the US-based technology giants, has been in the computer industry for a long time. With its graphics cards, the company is especially the favorite of gamers and professional graphic designers who need high graphic power. Nvidia, which has not been a competitor for some time, seems to not lose its place in the industry even though it is currently facing the AMD threat.

Recently, a question was raised from the official Twitter account of “Cyberpunk 2077” to the official Twitter account of Nvidia. The tweet was asked if they would make a special limited edition design for Cyberpunk 2077. Nvidia answered this question first with a cynical emoji. Then Nvidia, who shared an image, shared the blurry video card image you saw above and said, “Don’t leave …”.

This dialogue between the two was also met with great interest by the gamers. Many gamers expressed their desire to have such a specially designed graphics card. Some followers asked which model of Nvidia’s blurry graphics card. However, there was no explanation from Nvidia about this video card.

Nvidia’s upcoming specially designed graphics card will not appear as a new model, but most likely as a special version of one of the existing models. When considered in this context, we can say that one of the company’s “GeForce RTX 20” series graphics cards may be Cyberpunk 2077 themed. The last word on this issue will be said by Nvidia officials in the future.

Nvidia is currently working not only on video cards, but also on gaming technologies. So much so that the company has been on the agenda with the game streaming service it has called “GeForce Now” for a while. The company’s new service, GeForce Now, has been available to users as of last week. Gamers can subscribe to this system, where they can play games over the cloud, for $ 4.99.

Free Fire: How to Download and Play for Free on PC