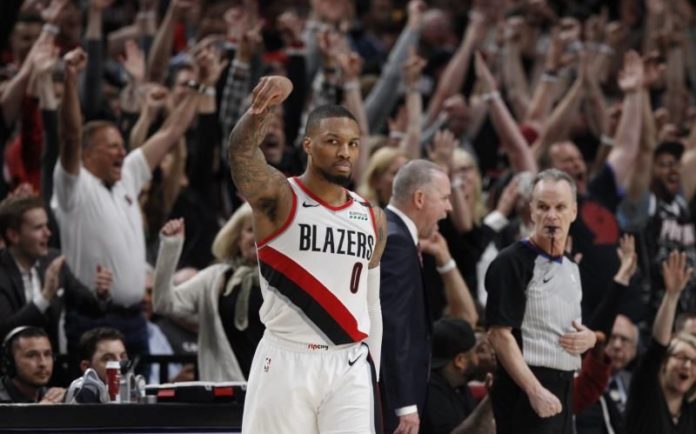 The base Damian Lillard, with 60 points, and escort D’Angelo Russell, who reached 52, were the leaders of the NBA day, which also highlighted the Slovenian forward Luka Doncic.

Despite this, the three suffered defeats with their respective teams of the Portland Trail Blazers, Golden State Warriors and Dallas Mavericks.

The Trail Blazers lost 115-119 to the Brooklyn Nets whose best player was the base guard reserve Spencer Dinwiddie, with 34 points, although the protagonism was monopolized by Lillard, who established a franchise mark with the highest single scoring game in this new season.

For his part, Russell returned as the Warriors holder and contributed 52 points against the Minnesota Timberwolves.

It was the second time in NBA history that there were at least two scorers of 50 points on the same day.

The previous time was on April 9, 1978, when David Thompson, of the Denver Nuggets, had 73 points, and George Gervin, of the San Antonio Spurs, achieved 63, both also with defeats.

Canadian forward Andrew Wiggins scored 40 points, including the basket that marked the draw and forced overtime, and the Minnesota Timberwolves surpassed Russell’s 52 points, the best professional score, and beat the Warriors 125-119.

The Golden State team took advantage of Russell’s incessant inspiration, who played 40 minutes and scored 19 of 37 field shots, including 7 of 17 triples, and 7 of 8 from the personnel line.

Russell had missed the previous three games due to a right ankle injury, and with his return he had his seventh starting lineup in 10 games.

Cameroonian power forward Pascal Siakam matched his best mark by scoring 44 points and the Toronto Raptors won 104-122 at home to the New Orleans Pelicans, which add only one victory in the season.

Siakam joined the late Chris Bosh, escorts Vince Carter and DeMar DeRozan as the four Raptors players who had several games of more than 40 points and 10 rebounds.

The Raptors won despite the fact that Kyle Lowry (left thumb) and Spanish nationalized Congolese Serge Ibaka (sprained right ankle) missed the second half of the game.

The power forward Marcus Morris scored 29 points, his best season mark and the New York Knicks defeated the Mavericks 102-106 at home, who had the Latvian centerman Kristaps Porzingis, as his second top scorer, but the former New York team player He could not avoid defeat.

Porzingis scored 28 points and Doncic achieved his best professional mark by contributing 38 points and getting his triple-double room so far this season.

But neither of them were successful in the decisive moments, although Doncic got 14 rebounds, 10 assists and committed eight turnovers, to one to tie his worst mark.

Doncic had the opportunity to tie the score with a three-fold attempt after power forward Taj Gibson, with 25 seconds to the end of regulation time.

Both were the only two Los Angeles team players with two-digit number entry.

The Lakers improved their mark to 7-1 so far this season and 4-0 in their field, the best in the league, and the first time they have achieved it since the 2010-11 season.

McConnell, who finished one point below his best professional mark, added nine assists and five rebounds.

With their victory the Pacers improved their mark to 5-4 and moved above the .500 percentage for the first time this season.

The Indiana team has won five of six games after starting the season with a 0-3 losing record.