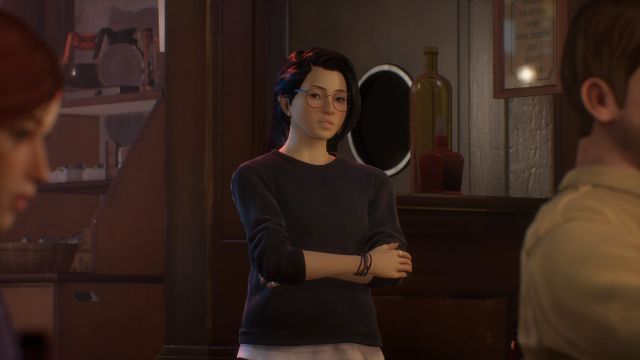 Life is Strange: This new title in the saga is not developed by Dontnod Entertainment, since the creators of Life is Strange: Before the Storm have taken the baton. Life is Strange: True Colors is the new main installment of this narrative adventure saga, a series started by Dontnod Entertainment that now continues in the hands of the North American Deck Nine Games. The particularity of this chapter is that Alex, the new protagonist, is able to read people’s emotions and act accordingly. In a new entry on the official PlayStation blog, narrative director Jonathan Zimmerman has delved into this question.

“Emotions are expressed with auras surrounding the characters that can explode into novae of light and color when emotions get out of control. Each of these experiences transforms Alex’s world, offering her valuable perspective to other people, but with fear of consuming her own consciousness, ”he explains. In the development study they pondered how to capture something as abstract as emotions or feelings. In the end, they ended up approaching each nova as a unique experience. They created “four general categories of emotions.”

These are the four emotions of Life is Strange: True Colors

Sadness: Sadness is expressed with a fluid and domineering blue aura. Within a nova of sadness, the world turns blue-gray. As if a storm cloud had covered the sun. Everything seems rougher, darker and sadder. You can witness firsthand how Alex watches Steph mourn Gabe’s death.
Fear: Fear is expressed with a purple aura that jumps, like an EKG monitor. Inside a scary nova, the world is filled with jagged lines and dark shadows. The player will be able to hear her heartbeat. There will be scares around every corner. As you look into the depths of her abyss, you will also be able to see monsters staring at her. Alex takes a look at her fears in Haven Spring while Mac is overwhelmed by what happened after Gabe’s death.
Fury: Fury is expressed as a violent red that flashes like a flame. Inside a nova of fury, the world is intense and hot. The lights and sounds are louder and the movements become violent. The player will be able to hear a short, shallow heartbeat. The world seems like the adrenaline rush of a clenched fist. Anger reaches Alex as he witnesses Steph having a tense conversation on the phone, while they involuntarily mimic Steph’s same frustrated gestures.
Joy: Joy is expressed with a golden aura that shines like a solar halo. Within an aura of joy, the world seems like a bubble full of love and laughter. An explosion of color, pleasant sounds. Memories are tinged with glitter and the present seems to have no limits. Joy brings Alex back to Gabe’s farewell party at the Flower Bridge with the entire Haven Spring community, watching the lantern lights drift into the darkness of the sky.
Life is Strange: True Colors will be released on September 10 on PS4, PS5, Xbox One, Xbox Series X, Xbox Series S, Nintendo Switch, PC and Google Stadia.

It’s time for a new Hulk or Hulk Woman game