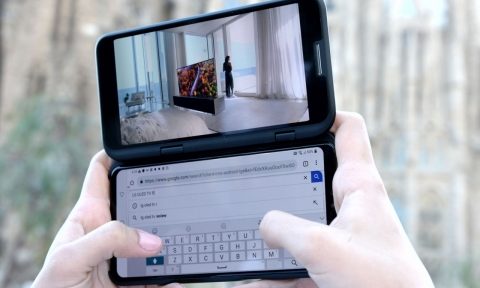 LG recently announced its new dual-screen flagship V60 ThinQ 5G, and announced that its phones will be available in March. Keeping its promise, the company launched its new phone through some telecommunications companies.

South Korean technology giant LG recently introduced the new dual-screen flagship V60 ThinQ 5G to consumers. The phone, which normally has a single screen, attracted attention with its second screen that can be worn like a case. The company had not announced the price of its new flagship phone during its launch. As of today, the price of the LG V60 ThinQ 5G has surfaced.

LG officials announced during the introduction of the V60 ThinQ 5G that this device will be available in North America, Europe and many Asian countries in March. According to new announcements from the company, consumers will have LG’s new phone by March 20-26. For now, LG will sell its V60 ThinQ 5G through telecommunications companies.

According to the statements made by LG, consumers; If they want to own the V60 ThinQ 5G via T-Mobile, they will have to pay $ 799. T-Mobile will also be able to make installments up to 24 months for these phones under the laws in the regions it serves.

T-Mobile will only sell a special dual-screen version of the LG V60 ThinQ 5G to selected customers for a while. T-Mobile’s lucky customers will also have LG’s new flagship and T-Mobile’s second-screen display equipment for $ 899.

Verizon, one of the leading US telecommunications companies, will also sell LG’s new dual-screen flagship. Verizon, which will start selling on March 26, will ask customers to pay $ 949.99 for this phone. The second screen of the LG V60 ThinQ 5Gs sold by Verizon will be available for free via LG.

AT&T, a multinational telecommunications company located in the USA, has not yet announced any price for consumers. In the statements made by the company, it was stated that the sales of the phone will start on March 20, while the customers who bought the V60 ThinQ 5G will be the first to use “AT&T Personal Cloud”.

JUNGKOOK, HIS HISTORY AND ROAD TO SUCCESS

One Player Completes Even Minecraft Without Digging a Single Block

Ethereum Network Usage At The Highest Of All Time

Infinity Ward to make new wave of banns in Call of...

Elon Musk: I Believe that the Robotaxi Project Will Come to...