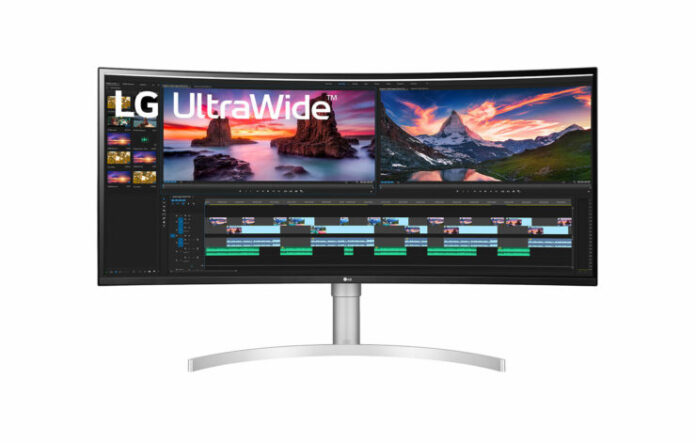 Not content with a rather large screen of only 38 inches, LG manages to set this monitor apart from the rest with its QHD + image quality. Monitors with many ultra-wide-angle displays on the market only work at 1440p or 1080p resolution, the LG 38WN95C-W has a higher image quality than other commercially available ultra-wide-angle monitors with a resolution of 3,840 x 1,600p.

The LG 38WN95C-W will support both NVIDIA and AMD’s Adaptive Sync technologies:

According to other information revealed, the LG 38WN95C-W will work in harmony with both NVIDIA’s G-Sync and AMD’s Freesync technology. But supported Adaptive Sync technologies will only work between 48 Hz and 144 Hz refresh rates. So those who want to use the monitor with the highest refresh rate of 170 Hz offered by LG will not be able to benefit from Adaptive Sync technologies. In addition, the LG 38WN95C-W is also DisplayHDR 600 certified by VESA.

The LG 38WN95C-W is originally available with a 144 Hz refresh rate. This speed is defined as a sufficient speed for all players and video editors, including those playing in the competitive arena. But for those who want to reach more refresh rate, there is an option to overclock up to 170 Hz. Overclocking can be done simply from the settings tab on the monitor’s desktop. Finally, the ports on the LG 38WN95C-W are as follows: one Thunderbolt 3, one DisplayPort, two HDMI 2.0, two USB 3.0 and one 3.5 mm headphone jack. The price of the LG 38WN95C-W, which is currently open for pre-order, is $ 1,599.